Back to save New York 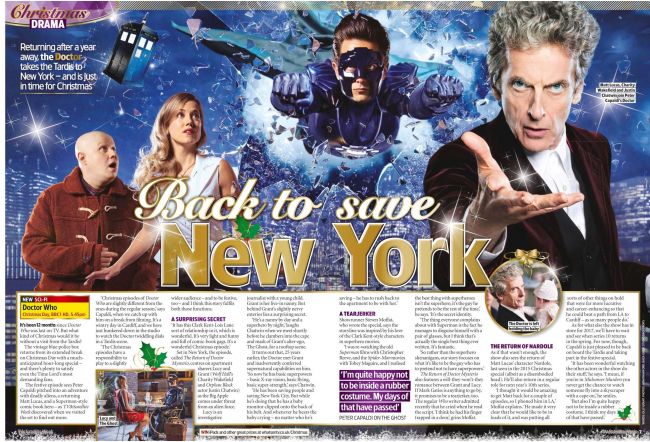 Returning after a year away, the Doctor takes the Tardis to New York - and is just, in time for Christmas

It's been12 months since Doctor Who was last on TV. But what kind of Christmas would it be without a visit from the Tardis?

The vintage blue police box returns from its extended break on Christmas Day with a much-anticipated hour-long special —and there's plenty to satisfy even the Time Lord's most demanding fans.

The festive episode sees Peter Capaldi pitched into an adventure with deadly aliens, a returning Matt Lucas, and a Superman-style comic book hero — as TV&Satellite Week discovered when we visited the set to find out more.

'Christmas episodes of Doctor Who are slightly different from the ones during the regular season; says Capaldi, when we catch up with him on a break from filming. It's a wintry day in Cardiff, and we have just hunkered down in the studio to watch the Doctor twiddling dials in a Tardis scene.

'The Christmas episodes have a responsibility to play to a slightly wider audience — and to be festive, too — and I think this story fulfils both those functions.

'It has this Clark Kent-Lois Lane sort of relationship in it, which is wonderful. It's very light and funny and full of comic-book gags. It's a wonderful Christmas episode.'

Set in New York, the episode, called The Return of Doctor Mysterio, centres on apartment sharers Lucy and Grant ( Wolf Hall's Charity Wakefield and Orphan Black actor Justin Chatwin) as the Big Apple comes under threat from an alien force.

Lucy is an investigative journalist with a young child. Grant is her live-in nanny. But behind Grant's slightly nervy exterior lies a surprising secret.

'He's a nanny by day and a superhero by night; laughs Chatwin when we meet shortly before he clambers into the cape and mask of Grant's alter-ego, The Ghost, for a rooftop scene.

It turns out that, 25 years earlier, the Doctor met Grant and inadvertently conferred supernatural capabilities on him. 'So now he has basic superpowers — basic X-ray vision, basic flying, basic super-strength; says Chatwin.

'He has been saving people and saving New York City. But while he's doing that he has a baby monitor clipped onto the back of his belt. And whenever he hears the baby crying — no matter who he's saving — he has to rush back to the apartment to be with her.'

Showrunner Steven Moffat, who wrote the special, says the storyline was inspired by his love of the Clark Kent-style characters in superhero movies.

'I was re-watching the old Superman films with Christopher Reeve, and the Spider-Man movies with Tobey Maguire, and I realised the best thing with superheroes isn't the superhero, it's the guy he pretends to be the rest of the time; he says. 'It's the secret identity.

'The thing everyone complains about with Superman is the fact he manages to disguise himself with a pair of glasses, but I think that's actually the single best thing ever written. It's fantastic.

'So rather than the superhero shenanigans, our story focuses on what it's like to be the guy who has to pretend not to have superpowers.

The Return of Doctor Mysterio also features a will-they-won't-they romance between Grant and Lucy. If Mark Gatiss is anything to go by, it promises to be a tearjerker, too. The regular Who writer admitted recently that he cried when he read the script. 'I think he had his finger trapped in a door; grins Moffat.

THE RETURN OF NARDOLE

As if that wasn't enough, the show also sees the return of Matt Lucas' character Nardole, last seen in the 2015 Christmas special (albeit as a disembodied head). He'll also return in a regular role for next year's 10th series.

'I thought it would be amazing to get Matt back for a couple of episodes, so I phoned him in LA,' Moffat explains. 'He made it very clear that he would like to be in loads of it, and was putting all sorts of other things on hold that were far more lucrative and career-enhancing so that he could beat a path from LA to Cardiff— as so many people do.'

As for what else the show has in store for 2017, we'll have to wait and see when series 10 returns in the spring. For now, though, Capaldi is just pleased to be back on board the Tardis and taking part in the festive special.

'It has been wonderful watching the other actors in the show do their stuff,' he says. 'I mean, if you're in Midsomer Murders you never get the chance to watch someone fly into a skyscraper with a cape on,' he smiles.

Tut also I'm quite happy not to be inside a rubber costume. I think my days of that have passed.'

Caption: The Doctor is left holding the baby