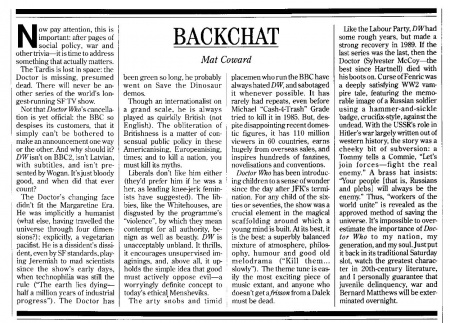 Now pay attention, this is important: after pages of social policy, war and other trivia—it is time to address something that actually matters. The Tardis is lost in space: the Doctor is missing, presumed dead. There will never be another series of the world's longest-running SF TV show.

Not that Doctor Who's cancellation is yet official: the BBC so despises its customers, that it simply can't be bothered to make an announcement one way or the other. And why should it? DW isn't on BBC2, isn't Latvian, with subtitles, and isn't presented by Wogan. It's just bloody good, and when did that ever count?

The Doctor's changing face didn't fit the Margaretine Era. He was implicitly a humanist (what else, having travelled the universe through four dimensions?); explicitly, a vegetarian pacifist. He is a dissident's dissident, even by SF standards, playing Jeremiah to mad scientists since the show's early days, when technophilia was still the rule ("The earth lies dying—half a million years of industrial progress"). The Doctor has been green so long, he probably went on Save the Dinosaur demos.

Though an internationalist on a grand scale, he is always played as quirkily British (not English). The obliteration of Britishness is a matter of consensual public policy in these Americanising, Europeanising, times; and to kill a nation, you must kill its myths.

Liberals don't like him either (they'd prefer him if he was a her, as leading knee-jerk feminists have suggested). The libbies, like the Whitehouses, are disgusted by the programme's "violence", by which they mean contempt for all authority, benign as well as beastly. DW is unacceptably unbland. It thrills, it encourages unsupervised imaginings, and, above all, it upholds the simple idea that good must actively oppose evil—a worryingly definite concept to today's ethical, Mensheviks.

The arty snobs and timid placemen who run the BBC have always hated DW, and sabotaged it whenever possible. It has rarely had repeats, even before Michael "Cash-4-Trash" Grade tried to kill it in 1985. But, despite disappointing recent domestic figures, it has 110 million viewers in 60 countries, earns hugely from overseas sales, and inspires hundreds of fanzines, novelisations and conventions.

Doctor Who has been introducing children to a sense of wonder since the day after JFK's termination. For any child of the sixties or seventies, the show was a crucial element in the magical scaffolding around which a young mind is built. At its best, it is the best: a superbly balanced mixture of atmosphere, philosophy, humour and good old melodrama ("Kill them... slowly"). The theme tune is easily the most exciting piece of music extant, and anyone who doesn't get a frisson from a Dalek must be dead.

Like the Labour Party, DWhad some rough years, but made a strong recovery in 1989. If the last series was the last, then the Doctor (Sylvester McCoy—the best since Hartnell) died with his boots on. Curse of Fenric was a deeply satisfying WW2 vampire tale, featuring the memorable image of a Russian soldier using a hammer-and-sickle badge, crucifix-style, against the undead. With the USSR's role in Hitler's war largely written out of western history, the story was a cheeky bit of subversion: a Tommy tells a Commie, "Let's join forces—fight the real enemy." A brass hat insists: "your people [that is, Russians and plebs] will always be the enemy." Thus, "workers of the world unite" is revealed as the approved method of saving the universe. It's impossible to overestimate the importance of Doctor Who to my nation, my generation, and my soul. Just put it back in its traditional Saturday slot, watch the greatest character in 20th-century literature, and I personally guarantee that juvenile delinquency, war and Bernard Matthews will be exterminated overnight.