Baddies of the Beeb 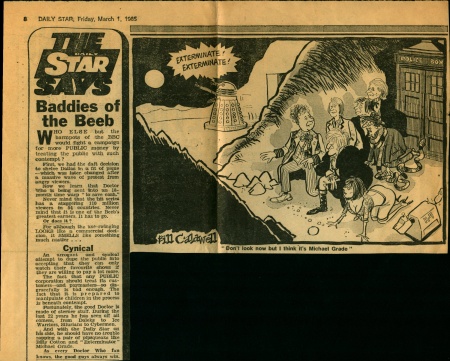 WHO ELSE but the barmpots of the BBC would fight a campaign for more PUBLIC money by treating the public with such contempt ?

First, we had the daft decision to shelve Dallas in a fit of pique-—which was later changed after a massive wave of protest from angry viewers.

Now we learn that Doctor Who is being sent into an 18-month time warp "to save cash."

Never mind that the hit series has a staggering 110 million viewers in 54 countries. Never mind that it is one of the Beeb's greatest earners. It has to go.

An arrogant and cynical attempt to dupe the public into accepting that they can only watch their favourite shows if they are willing to pay a lot more.

The fact that any PUBLIC corporation: should treat its customers-and paymasters—so disgracefully is bad enough. The fact that it is prepared to manipulate children in the process is beneath contempt.

Fortunately, the good Doctor is made of sterner stuff. During the last 22 years he has seen oft all corners, from Daleks to Ice Warriors, Silurians to Cybermen.

And with the Daily Star on his side, he should have no trouble zapping a pair of pipsqueaks like Billy Cotton and "Exterminator" Michael Grade.

As every Doctor Who fan knows, the good guys always win.

"Don't look now but I think it's Michael Grade"