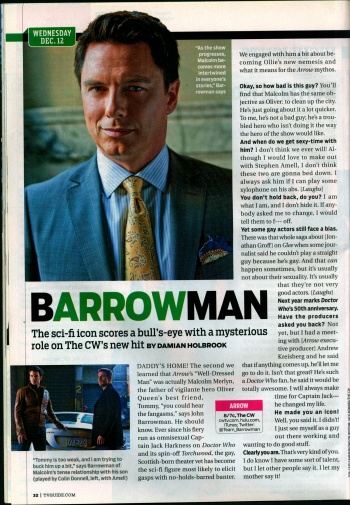 DADDY'S HOME! The second we learned that Arrow's "Well-Dressed Man" was actually Malcolm Merlyn, the father of vigilante hero Oliver Queen's best friend, Tommy, "you could hear the fangasms," says John Barrowman. He should know. Ever since his fiery run as omnisexual Captain Jack Harkness on Doctor Who and its spin-off Torchwood, the gay, Scottish-born theater vet has become the sci-fi figure most likely to elicit gasps with no-holds-barred banter. We engaged with him a bit about becoming Ollie's new nemesis and what it means for the Arrow mythos.

Okay, so how bad is this guy? You'll find that Malcolm has the same objective as Oliver: to clean up the city. He's just going about it a lot quicker. To me, he's not a bad guy; he's a troubled hero who isn't doing it the way the hero of the show would like.

And when do we get sexy-time with him? 1 don't think we ever will! Although I would love to make out with Stephen Amell, I don't think these two are gonna bed down. I always ask him if I can play some xylophone on his abs. [Laughs]

Yet some gay actors still face a bias. There was that whole saga about [Jonathan Groff] on Glee when some journalist said he couldn't play a straight guy because he's gay. And that can happen sometimes, but it's usually not about their sexuality. It's usually that they're not very good actors. [Laughs] Next year marks Doctor Who's 50th anniversary. Have the producers asked you back? Not yet, but I had a meeting with [Arrow executive producer] Andrew Kreisberg and he said that if anything comes up, he'll let me go to do it. Isn't that great? He's such a Doctor Who fan, he said it would be totally awesome. I will always make time for Captain Jack—he changed my life.

He made you an icon! Well, you said it. I didn't! I just see myself as a guy out there working and wanting to do good stuff.

Clearly you are. That's very kind of you. I do know I have some sort of talent, but I let other people say it. I let my mother say it!

Caption: "Tommy is too weak, and I am trying to buck him up a bit," says Barrowman of Malcolm's tense relationship with his son (played by Colin Donnell, left, with Amell)