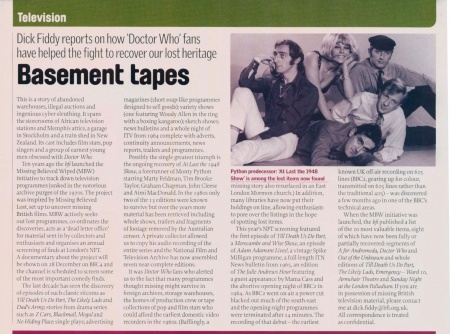 This is a story of abandoned warehouses, illegal auctions and ingenious cyber-sleuthing. It spans the storerooms of African television stations and Memphis attics, a garage in Stockholm and a train shed in New Zealand. Its cast includes film stars, pop singers and a group of earnest young men obsessed with Doctor Who.

Ten years ago the bfi launched the Missing Believed Wiped (MBW) initiative to track down television programmes junked in the notorious archive purges of the 1970s. The project was inspired by Missing Believed Lost, set up to uncover missing British films. MBW actively seeks out lost programmes, co-ordinates the discoveries, acts as a 'dead letter office' for material sent in by collectors and enthusiasts and organises an annual screening of finds at London's NFL A documentary about the project will be shown on 28 December on BBC4 and the channel is scheduled to screen some of the most important comedy finds.

The last decade has seen the discovery of episodes of such classic sitcoms as Till Death Us Do Part, The Likely Lads and Dad's Army; stories from drama series such as Z Cars, Blackmail, Mogul and No Hiding Place, single plays; advertising magazines (short soap-like programmes designed to sell goods); variety shows (one featuring Woody Allen in the ring with a boxing kangaroo); sketch shows; news bulletins and a whole night of ITV from 1964 complete with adverts, continuity announcements, news reports, trailers and programmes.

Possibly the single greatest triumph is the ongoing recovery of At Last the 1948 Show, a forerunner of Monty Python starring Marty Feldman, Tim Brooke-Taylor, Graham Chapman, John Cleese and Aimi MacDonald. In the 1980s only two of the 13 editions were known to survive but over the years more material has been retrieved including whole shows, trailers and fragments of footage removed by the Australian censor. A private collector allowed us to copy his audio recording of the entire series and the National Film and Television Archive has now assembled seven near-complete editions.

It was Doctor Who fans who alerted us to the fact that many programmes thought missing might survive in foreign archives, storage warehouses, the homes of production crew or tape collections of pop and film stars who could afford the earliest domestic video recorders in the 196os. (Bafflingly, a missing story also resurfaced in an East London Mormon church.) In addition, many libraries have now put their holdings on line, allowing enthusiasts to pore over the listings in the hope of spotting lost items.

This year's NFT screening featured the first episode of Till Death Us Do Part, a Morecambe and Wise Show, an episode of Adam Adamant Lives!, a vintage Spike Milligan programme, a full-length ITN News bulletin from 1965, an edition of The Julie Andrews Hour featuring a guest appearance by Mama Cass and the abortive opening night of BBC2 in 1964. As BBC2 went on air a power cut blacked out much of the south-east and the opening-night programmes were terminated after 14 minutes. The recording of that debut — the earliest known UK off-air recording on 625 lines (BBC2, gearing up for colour, transmitted on 625 lines rather than the traditional 405) — was discovered a few months ago in one of the BBC's technical areas.

When the MBW initiative was launched, the bfi published a list of the 20 most valuable items, eight of which have now been fully or partially recovered: segments of A for Andromeda, Doctor Who and Out of the Unknown and whole editions of Till Death Us Do Part, The Likely Lads, Emergency— Ward 10, Armchair Theatre and Sunday Night at the London Palladium. If you are in possession of missing British television material, please contact me at dick.fiddy@bfi.org.uk. All correspondence is treated as confidential.

Caption: Python predecessor: 'At Last the 1948 Show' is among the lost items now found