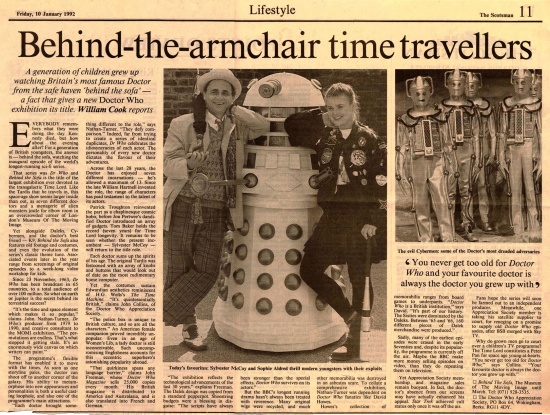 A generation of children grew up watching Britain's most famous Doctor from the safe haven 'behind the sofa' a fact that gives a new Doctor Who exhibition its title. William Cook reports

EVERYBODY remembers what they were doing the day Kennedy died, but how about the evening after? For a generation of British youngsters, the answer is — behind the sofa, watching the inaugural episode of the world's longest-running sci-fi series.

That series was Dr Who and Behind the Sofa is the title of the largest exhibition ever devoted to the transgalactic Time Lord. Like the Tardis that he travels in. this space-age show seems larger inside than out, as seven different doctors and a menagerie of alien monsters jostle for elbow room in an overcrowded corner of London's Museum Of The Moving Image.

Yet alongside Daleks, Cybermen, and the doctor's best friend — K9, Behind the Sofa also features old footage and costumes, and even the evolution of the series's classic theme tune. Associated events later in the year range from screenings of original episodes to a week-long video workshop for kids.

Since 23 November, 1963, Dr Who has been broadcast in 65 countries, to a total audience of over 100 million. So what on earth or jupiter is the secret behind its terrestrial success?

"It's the time and space element which makes it so popular," claims John Nathan-Turner, Dr Who's producer from 1979 to 1990, and creative consultant to the MOMI exhibition. "The permutations are endless. That's what stopped it getting stale. It's an enormously wide canvas on which writers can paint."

The programme's flexible format has enabled it to move with the times. As soon as one storyline pales, the doctor can shoot off to another corner of the galaxy. His ability to metamorphose into new appearances and personalities is both a useful casting loophole, and also one of the programme's main attractions.

"Each doctor brought some thing different to the role," says Nathan-Turner. "They defy comparison." Indeed, far from trying to create a series of identical duplicates, Dr Who celebrates the idiosyncracies of each actor. The personality of every new doctor dictates the flavour of their adventures.

Across the last 28 years, the Doctor has enjoyed seven different incarnations — he's allowed a maximum of 13. Since the late William Hartnell invented the role, the range of characters has paid testament to the talent of its actors.

Patrick Troughton reinvented the part as a chaplinesque cosmic hobo, before Jon Pertwee's dandified Doctor introduced an array of gadgets. Tom Baker holds the record (seven years) for Time Lord longevity. It remains to be seen whether the present incumbent — Sylvester McCoy — will return to the title role.

Each doctor sums up the spirits of his age. The original Tardis was festooned with an array of knobs and buttons that would look out of date on the most rudimentary home computer.

Yet the costumes sustain Edwardian aesthetics reminiscent of H G Wells's The Time Machine. "It's quintessentially British," claims John Collins, of the Doctor Who Appreciation Society.

"The police box is unique to British culture, and so are all the characters." An American female companion proved incredibly unpopular. Even in an age of Women's Lib, a lady doctor is still inconceivable. Such uncompromising Englishness accounts for this eccentric superhero's astonishing popularity abroad.

"That quirkiness spans any language barrier," claims John Freeman, whose Doctor Who Magazine sells 25,000 copies every month. His British magazine is distributed to America and Australasia, and is also translated into French and German.

"The exhibition reflects the technological advancements of the last 30 years," explains Freeman. The Dalek design was copied from a standard pepperpot. Shoestring budgets were a blessing in disguise: "The scripts have always been stronger than the special effects. Doctor Who survives on its actors."

But the BBC's longest running drama hasn't always been treated with reverence. Many original wigs were recycled, and much other memorabilia was destroyed in an asbestos scare. To collate a comprehensive exhibition, Nathan-Turner was dependent on Doctor Who fanatics like David Howes.

Howes's collection of memorabilia ranges from board games to underpants. "Doctor Who is a British institution," says David. "It's part of our history. The Sixties were dominated by the Daleks. Between '65 and '66, 160 different pieces of Dalek merchandise were produced."

Sadly, many of the earliest episodes were erased in the early Seventies and, despite its popularity, the programme is currently off the air. Maybe the BBC make more money selling episodes on video, than they do repeating them on television.

Yet Appreciation Society membership and magazine sales remain buoyant. In fact, the doctor's absence from our screens may have actually enhanced his appeal. Star Trek achieved cult status only once it was off the air.

Fans hope the series will soon be farmed out to an independent producer. Meanwhile, one Appreciation Society member is taking his satellite supplier to court, for reneging on a promise to supply old Doctor Who episodes, after BSB merged with Sky TV.

Why do grown men go to court over a children's TV programme? The Time Lord constitutes a Peter Pan for space age young-at-hearts. "You never get too old for Doctor Who," says Collins. "Your favourite doctor is always the doctor you grew up with."

Caption: The evil Cybermen: some of the Doctor's most dreaded adversaries