Behind every Dalek there's this woman 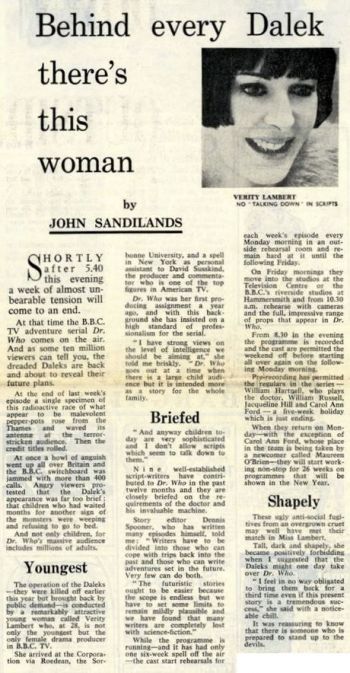 Shortly after 5.40 this evening a week of almost unbearable tension will come to an end.

At that time the B.B.C. TV adventures serial Dr. Who comes on the air. And in some ten million viewers can tell you the dreaded Daleks are back and about to reveal their future plans.

At the end of last week's episode a single specimen of this radioactive race of what appear to be malevolent pepper-pots rose from the Thames and waved its antenna at the terror stricken audience. Then the credit titles rolled.

At once a hollow of anguish went up all over Britain and the B.B.C. switchboard was jammed with more than 400 calls. Angry viewers protested that the doctor's appearance was far too brief that children who had waited months for another sign of the monsters were weeping and refusing to go to bed.

And not only children, for Dr. Who's massive audience includes millions of adults.

The operation of the Daleks -- they were killed off earlier this year but brought back by a public demand -- is conducted by remarkably attractive young woman called verity Lambert, who, at 28, is not only the youngest but the only female drama producer in B.B.C. TV.

If she arrived at the Corporation via Roeean, the Sorbonne University, and a spell in New York as personal system to David Susskind, the producer and commentator who was one of the top figures in American TV.

Dr. Who was her first produce an assignment a year ago, and with this background she has insisted on a high standard of professionalism for the series.

"I have strong views on the level of intelligence we should be aiming at," she told me briskly. "Dr. Who goes out at a time when there is a large child audience but it is intended more as a story for the whole family.

"And anyway children today are very sophisticated and I don't allow scripts which seem to talk down to them."

Nine well-established script writers have contributed to Dr. Who in the past 12 months and they are closely briefed on the requirements of the doctor and his invaluable machine.

Story editor Dennis Spooner, who has written many episodes himself, told me: "Writers have to be divided into those who can cope with trips back into the past and those who can write adventure set in the future. Very few can do both.

"The futuristic stories out to be easier because the scope as endless but we have to set some limits to remain mildly plausible and we have found that many readers are completely lost with science-fiction."

While the program is running -- and it has had only one six-week spell off the air -- the cast start rehearsals for each week's episode every Monday morning in and outside of her so room and remain hard at it until the following Friday.

On Friday morning's they move into the studios at the Television Centre or the B.B.C.'s riverside studios at Hammersmith and from 10:30 a.m. rehearse with cameras and the full, impressive range of props that appear in Dr. Who.

But from 8.30 the programme is recorded and the cast are permitted the weekend off before starting all over again the following Monday morning.

Pre-recording has permitted the regulars in the series -- William Hartnell, who plays the doctor, William Russell, Jacqueline Hill and Carol Ann Ford -- a five-week holiday which is just ending.

But when they return on Monday -- with the exception of Carol Ann Ford, whose place in the team is being taken by newcomer called Maureen O'Brien -- they will start working non-stop for 26 weeks on programs that will be shown in the new year.

These ugly anti-social fugitives from an overgrown cruet may well have met their match in Miss Lambert.

Tall, dark and shapely, she became positively forbidding what I suggested that the Daleks might one day take over Dr. Who.

"I feel in no way obligated to bring them back for a third time the even if this present story is a tremendous success," she said was a noticeable chill.

It was reassuring to know that there's someone who is prepared to stand up to the devils.