Bone to pick with this dog 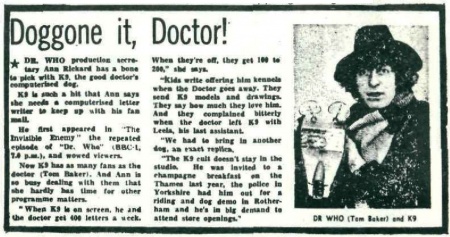 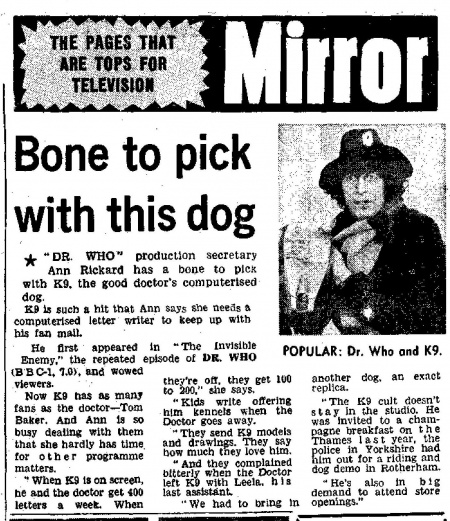 "DR. WHO" production secretary Ann Rickard has a bone to pick with K9, the good doctor's computerised dog.

K9 is such a hit that Ann says she needs a computerised letter writer to keep up with his fan mail.

He first appeared in "The Invisible Enemy," the repeated episode of DR. WHO (B B C-1, 7.0), and wowed viewers.

Now K9 has as many fans as the doctor—Tom Baker. And Ann is so busy dealing with them that she hardly has time, for other programme matters.

"Kids write offering him kennels when the Doctor goes away.

"They send K9 models and drawings. They say how much they love him.

"And they complained bitterly when the Doctor left KS with Leela, his last assistant.

"We had to bring in another dog, an exact replica.

"The K9 cult doesn't stay in the studio. He was invited to a champagne breakfast on the Thames last year, the police in Yorkshire had him out for a riding and dog demo in Rotherham.