Bonnie's bouncing in to boss the Doc 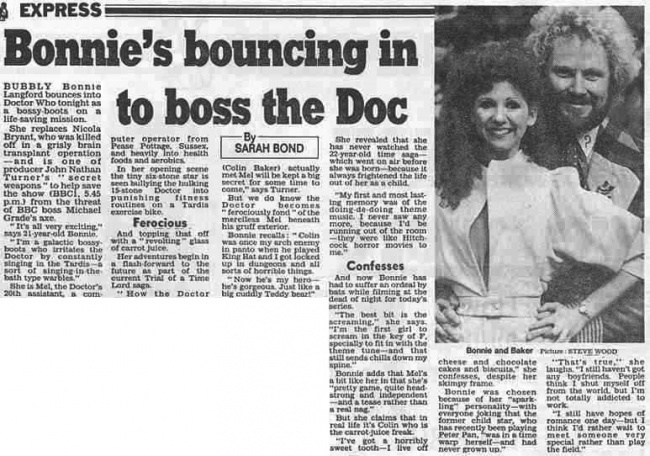 BUBBLY Bonnie Langford bounces into Doctor Who tonight as a bossy-boots on a life-saving mission.

She replaces Nicola Bryant, who was killed off in a grisly brain transplant operation — and is one of producer John Nathan Turner's "secret weapons" to help save the show (BBC1, 5.45 p.m.)from the threat of BBC bees Michael Grade's axe.

She is Mel, the Doctor's 20th assistant, a computer operator from Pease Pottage, Sussex, and heavily into health foods and aerobics.

In her opening scene the tiny six-stone star is seen bullying the hulking 15-stone Doctor into punishing fitness routines on a Tardis, exercise bike.

And topping that off with a "revolting" glass of carrot juice.

Her adventures begin in a flash-forward to the future as part of the current Trial of a Time lord saga.

"How the Doctor (Colin Baker) actually met Mel will be kept at big secret for solve time to some," says Turner.

But we do know the Doctor becomes "ferociously fond" of the merciless Mel beneath his gruff exterior.

Bonnie recalls: "Colin was ante my arch enemy in panto when he played King Rat and I got locked up in dungeons and all sorts of horrible things "Now he's my hero—he's gorgeous. Just like big cuddly Teddy bear!"

She revealed that she has never watched the 22-year-old time saga which went on air before she was born—because it always frightened the life out of her as a child.

"My first and most lasting memory was of the doing-de-doing theme music. I never saw any more, because I'd be running out of the room — they were like Hitchcock horror movies to me."

And now Bonnie has had to suffer an ordeal by bats while filming at the dead of night for today's series.

"The best bit in the screaming," she says. "I'm the first girl to scream in the key of F, specially to fit in with the theme tune—end that still sends chills down the spine."

Bonnie adds that Mel's a bit like her in that she's "pretty game, quite headstrong and independent — and a tease rather than a real nag."

But she claims that in real life it's Colin who is the carrot-juice freak. "I've got a horribly sweet tooth—I live off cheese and chocolate cakes and biscuits," she confesses, despite her skimpy frame.

Bonnie was chosen because of her "sparkling" personality — with everyone joking that the former child star, who has recently been playing Peter Pan, "was in a time warp herself—and had never grown up."

"That's true," she laughs." I still haven't got any boyfriends. People think I shut myself off from the world, but m not totally addicted to work.

"I still have hopes of romance one day—but I think I'd rather wait to meet someone very special rather than play the field."