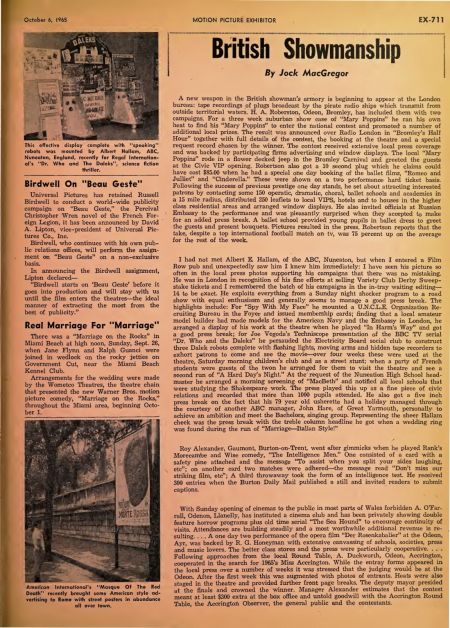 I had not met Albert E. Hallam, of the ABC, Nuneaton, but when I entered a Film Row pub and unexpectedly saw him I knew him immediately: I have seen his picture so often in the local press photos supporting his campaigns that there was no mistaking. He was in London in recognition of his fine efforts at selling Variety Club Derby Sweepstake tickets and I remembered the batch of his campaigns in the in-tray waiting editing-14 to be exact. He exploits everything from a Sunday night shocker program to a road show with equal enthusiasm and generally seems to manage a good press break. The highlights include: For 'Spy With My Face" he mounted a U.N.C.L.E. Organization Recruiting Bureau in the Foyer and issued membership cards; finding that a local amateur model builder had made models for the American Navy and the Embassy in London, he arranged a display of his work at the theatre when he played "In Harm's Way" and got a good press break; for Joe Vegoda's Techniscope presentation of the BBC TV serial "Dr. Who and the Daleks" he persauded the Electricity Board social club to construct three Dalek robots complete with flashing lights, moving arms and hidden tape recorders to exhort patrons to come and see the movie—over four weeks these were used at the theatre, Saturday morning children's club and as a street stunt; when a party of French students were guests of the twon he arranged for them to visit the theatre and see a second run of "A Hard Day's Night." At the' request of the Nuneation High School headmaster he arranged a morning screening of "MacBeth" and notified all local schools that were studying the Shakespeare work. The press played this up as a fine piece of civic relations and recorded that more than 1000 pupils attended. He also got a five inch press break on the fact that his 70 year old usherette had a holiday managed through the courtesy of another ABC manager, John Hare, of Great Yarmouth, personally to achieve an ambition and meet the Bachelors, singing group. Representing the sheer Hallam cheek was the press break with the treble column headline he got when a wedding ring was found during the run of "Marriage—Italian Style"