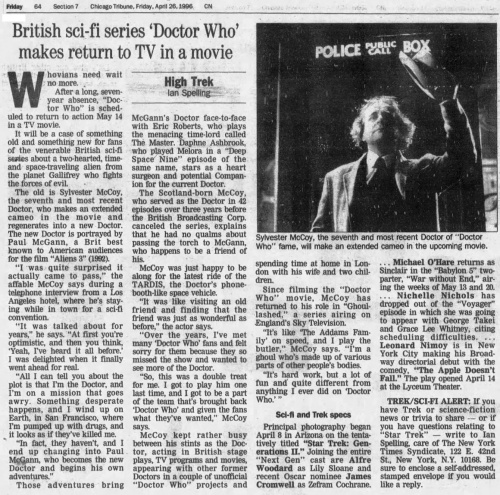 After a long, seven-year absence, "Doctor Who" is scheduled to return to action May 14 in a TV movie.

It will be a case of something old and something new for fans of the venerable British sci-fi sevies about a two-hearted, time-and space-traveling alien from the planet Gallifrey who fights the forces of eviL

The old is Sylvester McCoy, the seventh and most recent Doctor, who makes an extended cameo in the movie and regenerates into a new Doctor. The new Doctor is portrayed by Paul McGann, a Brit best known to American audiences for the film "Aliens 3" (1992).

"I was quite surprised it actually came to pass," the affable McCoy says during a telephone interview from a Los Angeles hotel, where he's staying while in town for a sci-fi convention.

"It was talked about for years," he says. "At first you're optimistic, and then you think, 'Yeah, I've heard it all before.' I was delighted when it finally went ahead for real.

"All I can tell you about the plot is that I'm the Doctor, and I'm on a mission that goes awry. Something desperate happens, and I wind up on Earth, in San Francisco, where I'm pumped up with drugs, and it looks as if they've killed me.

"In fact, they haven't, and I end up changing into Paul MgC,jam, who becomes the new Doctor and begins his own adventures."

Those adventures bring McGann's Doctor face-to-face with Eric Roberts, who plays the menacing time-lord called The Master. Daphne Ashbrook, who played Melora in a "Deep Space Nine" episode of the same name, stars as a heart surgeon and potential Companion for the current Doctor.

The Scotland-born McCoy, who served as the Doctor in 42 episodes over three years before the British Broadcasting Corp. canceled the series, explains that he had no qualms about passing the torch to McGann, who happens to be a friend of his.

McCoy was just happy to be along for the latest ride of the TARDIS, the Doctor's phone-booth-like space vehicle.

"It was like visiting an old friend and finding that the friend was just as wonderful as before," the actor says.

"Over the years, I've met many 'Doctor Who fans and felt sorry for them because they so missed the show and wanted to see more of the Doctor.

"So, this was a double treat for me. I got to play him one last time, and I got to be a part of the team that's brought back 'Doctor Who' and given the fans what they've wanted," McCoy says.

McCoy kept rather busy between his stints as the Doctor, acting in British stage plays, TV programs and movies, appearing with other former Doctors in a couple of unofficial "Doctor Who" projects and spending time at home in London with his wife and two children.

Since filming the "Doctor Who" movie, McCoy has returned to his role in "Ghoul-lashed," a series airing on England's Sky Television.

"It's like The Addams Family' on speed, and I play the butler," McCoy says. "I'm a ghoul who's made up of various parts of other peoples bodies.

"It's hard work, but a lot of fun and quite different from anything I ever did on 'Doctor Who.'"

Caption: Sylvester McCoy, the seventh and most recent Doctor of "Doctor Who" fame, will make an extended cameo in the upcoming movie.