Campaign Against TV Smut and Violence 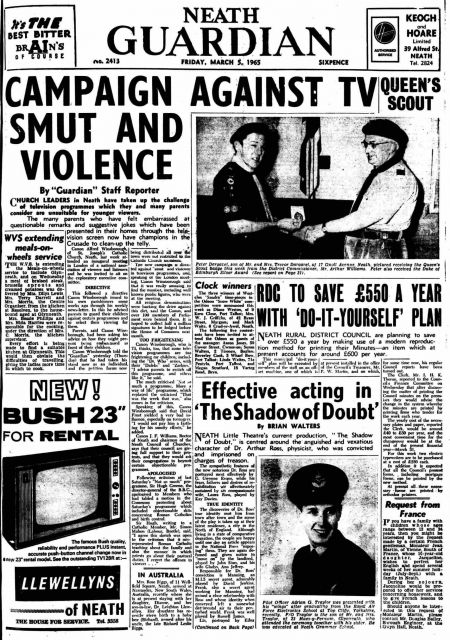 CHURCH LEADERS in Neath have taken up the challenge of television programmes which they and many parents consider are unsuitable for younger viewers.

The many parents who have felt embarrassed at questionable remarks and suggestive jokes which have been presented in their homes through the television screen now have champions in the Crusade to clean-up the telly.

Canon Alfred Winsborough, of St. Joseph's Catholic Church, Neath, last week attended an inaugural meeting in London of a national association of viewers and listeners and he was invited to sit on the exploratory executive committee.

This followed a directive Canon Winsborough issued to his own parishioners some weeks ago through his weekly news-letter. In this he advised parents to guard their children against certain programmes and to select their viewing for them.

Parents, said Canon Winsborough, had been asking his advice on how they might prevent being embarrassed in front of their children.

Canon Winsborough told the "Guardian" yesterday (Thursday) that he had taken his stand now as an individual, and the petition forms now being distributed all over the town were not restricted to the Catholic Church members.

The new campaign is directed against smut and violence in television programmes, and, speaking of the London meeting, Canon Winsborough said that it was really amazing to find the number, including well known public figures, who were at time meeting.

All religious denominations were backing the drive against this dirt, said the Canon, and over 100 members of Parliament were behind them, it is hoped to collect half a million signatures to be lodged before the House of Commons next month.

Canon Winsborough, who is 73, thinks, too, that some television programmes are too frightening for children, including the "Dr. Who' series, with their "Daleks" and "Zarbies." "I advise parents to switch off this programme, and others like it," he said.

The much criticised "Not so much a programme, More a way of life" programme, which replaced the criticised "That was the week that was," also comes in for criticism.

Speaking of this, Canon Winsborough said that David Frost yielded a very bad influence, especially on teenagers. "I would not pay him a farthing for his smutty efforts," he added.

Canon J. F. Williams, Rector of Neath and chairman of the Neath Council of Churches, says that their council arc giving full support to their protests, and that they would ask their congregations to boycott certain objectionable programmes.

Following criticism of last Saturday's "Not so much" programme, Sir Hugh Greene, the director-general of the 8.8.C., apologised to Members who had tabled a motion in the Commons protesting about Saturday's programme which included objectionable skits concerning Roman Catholics and birth control.

Sir Hugh, writing to a Catholic Member, Mr. Simon Mahon (Labour, Bootle), said, "I agree this sketch was open to the criticism that it misrepresented Roman Catholic teaching about the family and also the manner in which priests go about their pastoral duties. I regret the offence to viewers ..."