Capaldi's wiser, older Doctor cuts through the hype -but the plot is still beyond daft 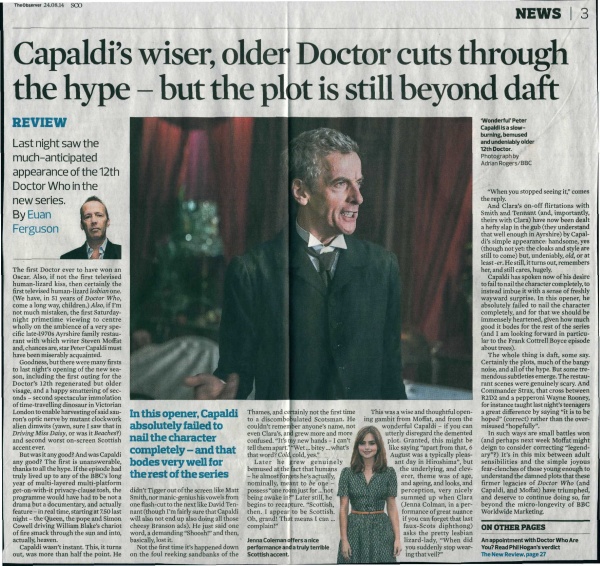 Last night saw the much-anticipated appearance of the 12th Doctor Who in the new series.

The first Doctor ever to have won an Oscar. Also, if not the first televised human-lizard kiss, then certainly the first televised human-lizard lesbian one. (We have, in 51 years of Doctor Who, come a long way, children.) Also, if I'm not much mistaken, the first Saturday-night primetime viewing to centre wholly on the ambience of a very specific late-1970s Ayrshire family restaurant with which writer Steven Moffat and, chances are, star Peter Capaldi must have been miserably acquainted.

Goodness, but there were many firsts to last night's opening of the new season, including the first outing for the Doctor's 12th regenerated but older visage, and a happy smattering of seconds - second spectacular immolation of time-travelling dinosaur in Victorian London to enable harvesting of said sauron's optic nerve by mutant clockwork alien dimwits (yawn, sure I saw that in Driving Miss Daisy, or was it Beaches?) and second worst on-screen Scottish accent ever.

But was it any good? And was Capaldi any good? The first is unanswerable, thanks to all the hype. If the episode had truly lived up to any of the BBC's long year of multi-layered multi-platform get-on-with-it privacy-clause tosh, the programme would have had to be not a drama but a documentary, and actually feature - in real time, starting at 7.50 last night - the Queen, the pope and Simon Cowell driving William Blake's chariot of fire smack through the sun and into, actually, heaven.

Capaldi wasn't instant, This, it turns out, was more than half the point. He didn't Tigger out of the screen like Matt Smith, nor manic-genius his vowels from one flash-cut to the next like David Tennant (though I'm fairly sure that Capaldi will also not end up also doing all those cheesy Branson ads). He just said one word, a demanding "Shoosh!" and then, basically, lost it.

Not the first time it's happened down on the foul reeking sandbanks of the Thames, and certainly not the first time to a discombobulated Scotsman. He couldn't remember anyone's name, not even Clara's, and grew more and more confused. "It's my new hands - I can't tell them apart 'Wet ... bitey ... what's that word? Cold, cold, yes."

Later he grew genuinely bemused at the fact that humans - he almost forgets he's actually, nominally, meant to be one possess "one room just for ...'hot being awake in?" Later still, he begins to recapture. "Scottish, then. I appear to be Scottish. Oh, grand! That means I can ... complain!"

This was a wise and thoughtful opening gambit from Moffat, and from the wonderful Capaldi - if you can utterly disregard the demented plot. Granted, this might be like saying "apart from that, 6 August was a typically pleasant day in Hiroshima", but the underlying, and cleverer, theme was of age, and ageing, and looks, and perception, very nicely summed up when Clara (Jenna Colman, in a performance of great nuance if you can forget that last faux-Scots diphthong) asks the pretty lesbian lizard-lady, "When did you suddenly stop wearing that veil?"

"When you stopped seeing it," comes the reply.

And Clara's on-off flirtations with Smith and Tennant (and, importantly, theirs with Clara) have now been dealt a hefty slap in the gub (they understand that well enough in Ayrshire) by Capaldi's simple appearance: handsome, yes (though not yet: the cloaks and style are still to come) but, undeniably, old, or at least -er. He still, it turns out, remembers her, and still cares, hugely.

Capaldi has spoken now of his desire to fail to nail the character completely, to instead imbue it with a sense of freshly wayward surprise. In this opener, he absolutely failed to nail the character completely, and for that we should be immensely heartened, given how much good it bodes for the rest of the series (and I am looking forward in particular to the Frank Cottrell Boyce episode about trees).

The whole thing is daft, some say. Certainly the plots, much of the bangy noise, and all of the hype. But some tremendous subtleties emerge. The restaurant scenes were genuinely scary. And Commander Strax, that cross between R2D2 and a pepperoni Wayne Rooney, for instance taught last night's teenagers a great difference by saying "it is to be hoped" (correct) rather than the over-misused "hopefully".

In such ways are small battles won (and perhaps next week Moffat might deign to consider correcting "legendary"?) It's in this mix between adult sensibilities and the simple joyous fear-clenches of those young enough to understand the damned plots that these firmer legacies of Doctor Who (and Capaldi, and Moffat) have triumphed, and deserve to continue doing so, far beyond the micro-longevity of BBC Worldwide Marketing.

An appointment with Doctor Who Are You? Read Phil Hogan's verdict