Capaldi and Moffat get ready for final trip in the Tardis 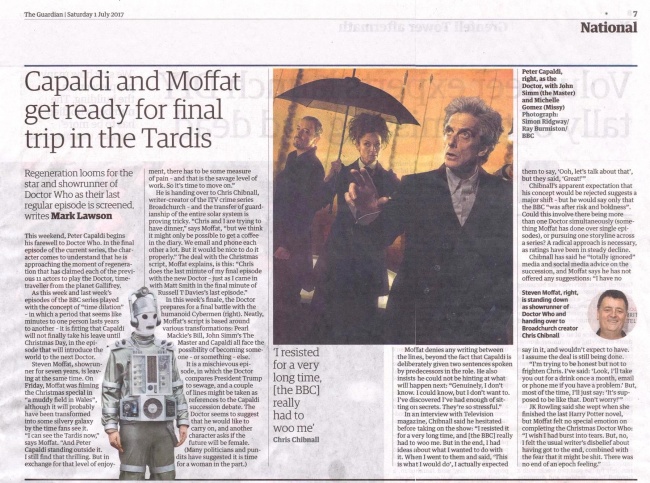 Regeneration looms for the star and showrunner of Doctor Who as their last regular episode is screened, writes Mark Lawson

This weekend, Peter Capaldi begins his farewell to Doctor Who. In the final episode of the current series, the character comes to understand that he is approaching the moment of regeneration that has claimed each of the previous 11 actors to play the Doctor, time-traveller from the planet Gallifrey.

As this week and last week's episodes of the BBC series played with the concept of "time dilation" - in which a period that seems like world to the next Doctor.

Steven Moffat, showrunner for seven years, is leaving at the same time. On Friday, Moffat was filming the Christmas special in "a muddy field in Wales", although it will probably have been transformed into some silvery galaxy by the time fans see it. "I can see the Tardis now," says Moffat. "And Peter Capaldi standing outside it. I still find that thrilling. But in exchange for that level of enjoyment, there has to be some measure of pain - and that is the savage level of work. So it's time to move on."

He is handing over to Chris Chibnall, writer-creator of the ITV crime series Broadchurch - and the transfer of guardianship of the entire solar system is proving tricky. "Chris and I are trying to have dinner," says Moffat, "but we think it might only be possible to get a coffee in the diary. We email and phone each other a lot. But it would be nice to do it properly?' The deal with the Christmas script, Moffat explains, is this: "Chris does the last minute of my final episode with the new Doctor - just as I came in with Matt Smith in the final minute of Russell T Davies's last episode."

In this week's finale, the Doctor prepares for a final battle with the humanoid Cybermen (right). Neatly, Moffat's script is based around various transformations: Pearl Mackie's Bill, John Simm's The Master and Capaldi all face the possibility of becoming someone - or something - else.

It is a mischievous episode, in which the Doctor compares President Trump to sewage, and a couple of lines might be taken as references to the Capaldi succession debate. The Doctor seems to suggest that he would like to carry on, and another character asks if the future will be female.

(Many politicians and pundits have suggested it is time for a woman in the part.)

Moffat denies any writing between the lines, beyond the fact that Capaldi is deliberately given two sentences spoken by predecessors in the role. He also insists he could not be hinting at what will happen next: "Genuinely, I don't know. I could know, but I don't want to. I've discovered I've had enough of sitting on secrets. They're so stressful."

In an interview with Television magazine, Chibnall said he hesitated before taking on the show: "I resisted it for a very long time, and [the BBC] really had to woo me. But in the end, I had ideas about what I wanted to do with it. Whim I went to them and said, 'This is what I would do', I actually expected them to say, 'Ooh, let's talk about that', but they said, 'Great!'"

Chibnall's apparent expectation that his concept would be rejected suggests a major shift - but he would say only that the BBC "was after risk and boldness". Could this involve there being more than one Doctor simultaneously (something Moffat has done over single episodes), or pursuing one storyline across a series? A radical approach is necessary, as ratings have been in steady decline.

Chibnall has said he "totally ignored" media and social media advice on the succession, and Moffat says he has not offered any suggestions: "I have no say in it, and wouldn't expect to have. I assume the deal is still being done.

"I'm trying to be honest but not to frighten Chris. I've said: 'Look, I'll take you out for a drink once a month, email or phone me if you have a problem? But, most of the time, I'll just say: 'It's supposed to be like that. Don't worry!'"

JK Rowling said she wept when she finished the last Harry Potter novel, but Moffat felt no special emotion on completing the Christmas Doctor Who: "I wish I had burst into tears. But, no, I felt the usual writer's disbelief about having got to the end, combined with the fear that it might be shit. There was no end of an epoch feeling."

Caption: Peter Capaldi, right, as the Doctor, with John Simm (the Master) and Michelle Gomez (Missy)

Caption: Steven Moffat, right, is standing down as showrunner of Doctor Who and handing over to Broadchurch creator Chris Chibnall