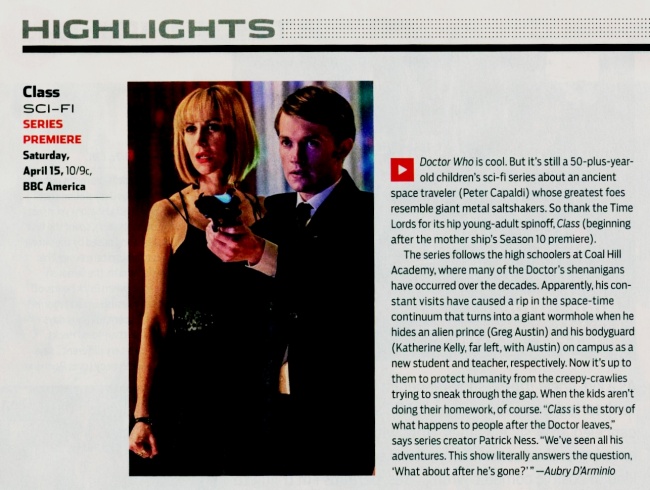 Doctor Who is cool. But it's still a 50-plus-year-old children's sci-fi series about an ancient space traveler (Peter Capaldi) whose greatest foes resemble giant metal saltshakers. So thank the Time Lords for its hip young-adult spinoff, Class (beginning after the mother ship's Season 10 premiere).

The series follows the high schoolers at Coal Hill Academy, where many of the Doctor's shenanigans have occurred over the decades. Apparently, his constant visits have caused a rip in the space-time continuum that turns into a giant wormhole when he hides an alien prince (Greg Austin) and his bodyguard (Katherine Kelly, far left, with Austin) on campus as a new student and teacher, respectively. Now it's up to them to protect humanity from the creepy-crawlies trying to sneak through the gap. When the kids aren't doing their homework, of course. "Class is the story of what happens to people after the Doctor leaves," says series creator Patrick Ness. "We've seen all his adventures. This show literally answers the question, "What about after he's gone?"