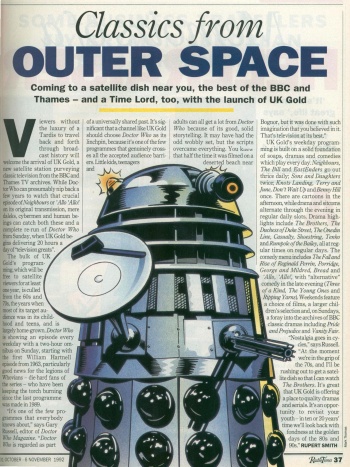 Viewers without the luxury of a Tardis to travel back and forth through broadcast history will welcome the arrival of UK Gold, a new satellite station purveying classic television from the BBC and Thames TV archives. While Doctor Who can presumably nip back a few years to watch that crucial episode of Neighbours or 'Allo 'Allo! on its original transmission, mere daleks, cybermen and human beings can catch both these and a complete re-run of Doctor Who from Sunday, when UK Gold begins delivering 20 hours a day of "television greats".

The bulk of UK Gold's programming, which will be free to satellite viewers for at least one year, is culled from the 60s and 70s, the years when most of its target audience was in its childhood and teens, and is largely home-grown. Doctor Who is showing an episode every weekday with a two-hour omnibus on Sunday, starting with the first William Hartnell episode from 1963, particularly good news for the legions of Whovians — die-hard fans of the series — who have been keeping the torch burning since the last programme was made in 1989.

"It's one of the few programmes that everybody knows about," says Gary Russell, editor of Doctor Who Magazine. "Doctor Who is regarded as part of a universally shared past. It's significant that a channel like UK Gold should choose Doctor Who as its linchpin, because it's one of the few programmes that genuinely crosses all the accepted audience barriers. Little kids, teenagers and adults can all get a lot from Doctor Who because of its good, solid storytelling. It may have had the odd wobbly set, but the scripts overcame everything. You knew that half the time it was filmed on a deserted beach near Bognor, but it was done with such imagination that you believed in it. That's television at its best."

UK Gold's weekday programming is built on a solid foundation of soaps, dramas and comedies which play every day. Neighbours, The Bill and EastEnders go out thrice daily; Sons and Daughters twice; Knots Landing, Terry and June, Don't Wait Up and Benny Hill once. There are cartoons in the afternoon, while drama and sitcoms alternate through the evening in regular daily slots. Drama highlights include The Brothers, The Duchess of Duke Street, The Onedin Line, Casualty, Shoestring, Tenko and Rumpole of the Bailey, all at regular times on regular days. The comedy menu includes The Fall and Rise of Reginald Perrin, Porridge, George and Mildred, Bread and 'Allo, 'Allo!, with "alternative" comedy in the late evening (Three of a Kind, The Young Ones and Ripping Yarns). Weekends feature a choice of films, a larger children's selection and, on Sundays, a foray into the archives of BBC classic dramas including Pride and Prejudice and Vanity Fair. "Nostalgia goes in cycles," says Russell. "At the moment we're in the grip of the 70s, and I'll be rushing out to get a satellite dish so that I can watch The Brothers. It's great that UK Gold is offering a place to quality dramas and serials. It's an opportunity to revisit your youth — in ten or 20 years' time we'll look back with fondness at the golden days of the 80s and 90s."