Classics too good to be forgotten 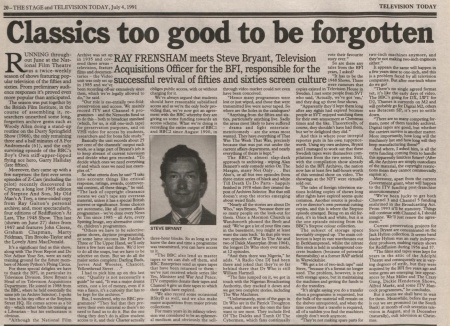 RUNNING throughout June at the National Film Theatre as a twice-weekly season of shows featuring popular television of the fifties and sixties. From preliminary audience responses it's proved even more popular than anticipated.

The season was put together by the British Film Institute, in the course of assembling it, researchers unearthed some long, forgotten archive gems such as Woody Allen doing a stand-up routine on the Dusty Springfield Show (1966), the only remaining three and a half minutes of A For Andromeda (61), and the only surviving episode of the BBC's Boy's Own stiff-upper-lipped flying ace hero, Garry Halliday (late fifties).

Moreover, they came up with a few surprises: the first ever seven episodes of Z-Cars (including the pilot) recently discovered in Cyprus; a long lost 1965 edition of Steptoe And Son, My Old Man's A Tory, a time-coded copy from Ray Gallon's personal archive; and, most spectacularly, four editions of Rediffusion's At Last, The 1948 Show. This last (shown on June 27) dates from 1967 and features John Cleese, Graham Chapman, Marty Feldman, Tim Brooke-Taylor and the Lovely Aimi MacDonald.

It's a significant find as this show, along with The Frost Report and Do Not Adjust Your Set, were an early training ground for the future members of Monty Python's Flying Circus.

For these special delights we have to thank the BFI, in particular its Television Division. Steve Bryant is Head of its Television Acquisitions Department. He joined in 1988 from the BBC, where he held essentially the same job (as Archive Selector). I spoke to him in his tiny office at the Stephen Street HQ. He comes across as a bit shy - which rather befits his training as a Librarian - but his enthusiasm is obvious.

"Although the National Film Archive was set up in 1935 and covered three areas - television, feature films and documentaries - the Video unit was only set up in 1985 and we've been recording off-air extensively since then, which we're legally allowed to do," he said.

"Our role is essentially two-fold: preservation and access. We mainly record ITV and Channel 4 programmes - and the Networks fund us to do this - both to broadcast standard (which, for us, is still one-inch tape) for preservation purposes, and on VHS video for access by students, researchers and for bona fide study."

Basically the unit records about 25 per cent of the channels' output each week, so a large part of Bryant's job is to keep abreast of current television and decide what gets recorded. "To decide which ones we need everything of and which ones we need just examples of."

So what criteria does he use? "I take into account things like critical response, ratings, awards, controversial content, all these things," he said. "The lack of copyright clearance means we can't tape any overseas material, unless it has a special British interest or significance. Some choices are automatic, like all current affairs programmes - we've done every News At Ten since 1985 - all Arts, every Spitting Image, any alternative comedy, children's programmes.

I had to pick him up on this last one: "Quality is not necessarily a guide" he said, "It was a major drama series, cost a lot of money, even if it was a fiasco, it's a curiosity that has to be kept for the archives."

But, I wondered, why no BBC programmes? "They feel that they preserve their own material so there's no need to fund us to do it. But the one thing they don't do is allow student access to it, and their Charter actually obliges public access, with or without charging for it.

We've always argued that students should have reasonable subsidised access and as we're the only body providing that, we've now got an agreement with the BBC whereby they are giving us some funding towards an access scheme. What we're doing is recording the entire output of BBC1 and BBC2 since August 1990, in three-hour blocks. So as long as you know the date and time a programme was transmitted, you can have access to it.

"The BBC also lend us master tapes so we can dub off them, and BBC Enterprises send us spare tapes that have been returned to them - we've just received whole series like Yes, Minister and War And Peace. ITV companies donate their tapes and Channel 4 give us their tapes to which their rights have expired.

"We also record some occasional BSkyB as well, and we also make major acquisitions from major private collections."

For many years in its infancy television was considered to be an ephemeral medium and obviously the sell-through video market could not even have been conceived.

"Hence many programmes were lost or just wiped, and those that were transmitted live were never taped. So where are the holes in the catalogues?

"Anything from the fifties and sixties, particularly anything live. Sadly the areas most likely to have suffered - drama and light entertainment/comedy - arc the areas most wanted. They have everything of That Was The Week That Was, precisely because that was put out under the current affairs department, and nearly everything of theirs is kept."

The BBC's almost slap-dash approach to archiving - wiping Alan Bennett's only comedy series On The Margin, many Not Only ... But Also's, or all but two episodes from three entire series of black and white Till Death Us Do Parts - happily finished in 1978 when they created the post of Archives Selector. But that still doesn't stop the stories emerging about weird finds.

"Nearly all the stories are about Dr Who," says Bryant, "because there are so many people on the look-out for them. Once a Mormon Church in Wandsworth phoned the Beeb and said: We've got a lot of your film cans in the basement, you might at least want the cans back.' In that pile were two episodes of War In The Air and two of Dalek Masterplan (from 1964), the longest Dr Who story ever made, at 12 episodes.

"And then there was Nigeria," he adds. "A Radio One DJ had been there and joked that they're so far behind there that Dr Who is still William Hartnell.

"The fans jumped on it, we got in touch with the Nigerian Broadcasting Authority, they tracked it down and we got two complete stories, including The War Machines.

"Unfortunately, most of the gaps in Dr Who are in the Patrick Troughton years, and these are the ones the fans want to see most. They include Evil Of The Daleks and Tomb of the Cybermen, which fans continually vote their favourite story ever."

So are there any tales from the BFI years, I asked?

"It to be the 1948 Shows. There were rumours that copies existed in Television House in Sweden. I met some people from SVT who said, 'Actually, we've got 'em,' and they dug up these four shows.

"Apparently they'd kept them long after any rights had expired because people at SVT enjoyed watching them for their own amusement at Christmas times and the like. Theoretically, of course, they shouldn't have had them, but we're delighted they did."

And this is where your intrepid reporter puts in his own tuppence-worth. Using my own archives, Bryant and I managed to work out that these Swedish tapes were themselves compilations from the two series. Still, with the compilation show already held in the BFI Archives, the nation now has at least five half-hours worth of this seminal show on video. The showings at the NFT were virtually sold out.

The tales of foreign television stations holding copies of shows long after rights have expired seems quite common. Another source is producer's or director's own personal cutting copies, and this is where the Steptoe episode emerged. Being on an old format, it's in black and white, but it is the one episode missing from the BBC's Steptoe colour collection.

The subject of storage space inevitably cropped up. The main collection is kept in vast warehouses out in Berkhampstead, whilst the nitrate film stock is held in underground concrete bunkers (because of potential flammability) at a former RAF airfield in Warwickshire.

'We get a lot of two-inch tape" said Steve, "because it's a format no longer used. The problem, however, is not with storage space, but in maintaining the machines and getting the funds to do the transfers.

"It's alright saying you do a transfer when a programme is requested, but the bulk of the material will remain on the shelves unrequested, and when the time comes that a transfer is required, all of a sudden you find the machines simply don't work anymore.

It appears the same will happen in a few years time to one-inch, and this is a problem faced by all television companies. But after one-inch where do we go?

"There's no single agreed format yet, it's like the early days of video. The BBC's going for DX, LWT for D2, Thames is currently on M2 and will probably go for Digital M2, others use Betacam SP, it's yet to settle down.

"There are so many competing formats, none of them terribly archival. Digital tapes are good, but whether the carriers survive is another matter. More importantly, how long will the machinery last and how long will they keep manufacturing them?"

And where, I asked him, is all the extra funding coming from to handle this apparently limitless future? (After all, the Archives are simply custodians of the material, the copyright restrictions mean they cannot commercially exploit it).

Moreover, apart from the current Government grant, what will happen to the ITV funding post-franchise announcements?

"We've been lucky to get both Channel 3 and Channel 5 funding enshrined in the Broadcasting Act. From 1993 it'll be statutory. Things will continue with Channel 4, I should imagine. We'll just renew the agreement."

Current preservation projects for Steve Bryant are concentrated on the Jack Hylton collection. It seems hand leader Hylton was an early independent producer, making variety shows for Rediffusion during 1956 and 57.

"The films and tapes were kept for years in the attic of the Adelphi Theatre and consequently are in varying degrees of strife, but they were acquired by the BFI five years ago and some gems are emerging: late appearances by Max Miller and The Crazy Gang, Dickie Henderson Shows, Alfred Marks, and some ITV Hancock programmes," he concludes.

But it seems we shall have to wait for them. Meanwhile, before the year is out we are promised (at the South Bank) at month of cult seventies television in August, and in December (naturally), cult television at Christmas.