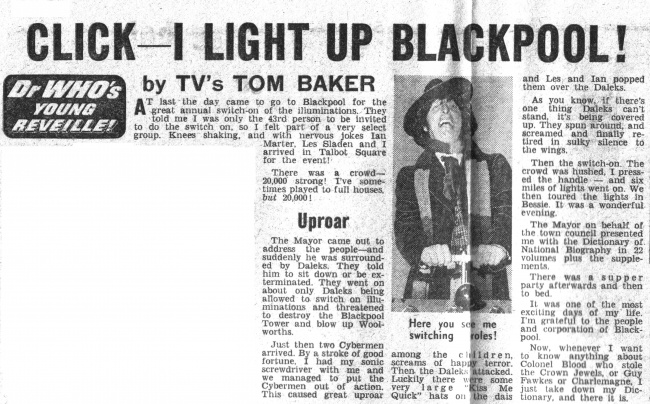 AT last the day came to go to Blackpool for the great annual switch-on of the illuminations. They told me I was only the 43rd person to be invited to do the switch on, so I felt part of a very select group. Knees shaking, and with nervous jokes Ian Marter, Les Sladen and I arrived in Talbot Square for the event!

The Mayor came out to address the people—and suddenly he was surrounded by Daleks. They told him to sit down or be exterminated. They went on about only Daleks being allowed to switch on illuminations and threatened to destroy the Blackpool Tower and blow up Woolworths.

Just then two Cybermen arrived. By a stroke of good fortune, I had my sonic screwdriver with me and we managed to put the Cybermen out of action. This caused great uproar among the children, screams of happy terror. Then the Daleks attacked. Luckily there were some very large "Kiss Me Quick" hats on the dais and Les, and Ian popped them over the Daleks.

As you know, if there's one thing Daleks can't stand, it's being covered up. They spun around, and screamed and finally retired in sulky silence to the wings.,

Then the switch-on. The crowd was hushed, I pressed the handle — and six miles of lights went on. We then toured the lights in Bessie. It, was a wonderful evening.

The Mayor on behalf of the town council presented me with the Dictionary of National Biography in 22 volumes plus the supplements.

There was a supper party afterwards and then to bed.

It wits one of the most exciting days of my life. I'm grateful to the people and corporation of Blackpool.

Now, whenever I want to know anything about Colonel Blood who stole the Crown Jewels, or Guy Fawkes or Charlemagne, I just, take down my Dictionary, and there it is.