Clone the Doctor Who Sound 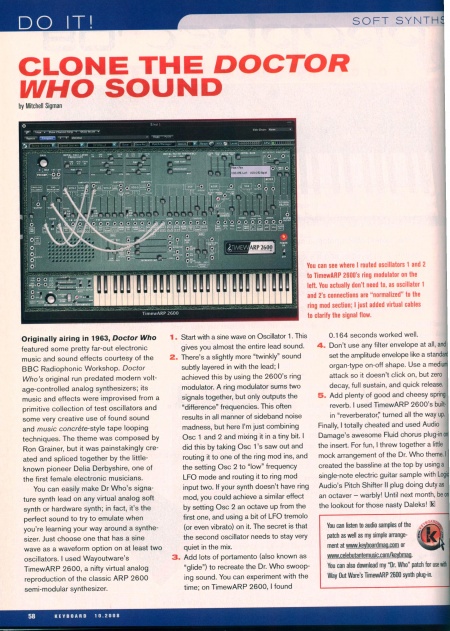 You can see where I routed oscillators 1 and 2 to TimewARP 2600's ring modulator on the left. You actually don't need to. as oscillator 1 and 2's connections are "normalized" to the ring mod section: I just added virtual cables to clarify the signal flow.

Originally airing in 1963, Doctor Who featured some pretty far-out electronic music and sound effects courtesy of the BBC Radiophonic Workshop. Doctor Who's original run predated modern voltage-controlled analog synthesizers; its music and effects were improvised from a primitive collection of test oscillators and some very creative use of found sound and music concréte-style tape looping techniques. The theme was composed by Ron Grainer, but it was painstakingly created and spliced together by the little-known pioneer Delia Derbyshire, one of the first female electronic musicians.

You can easily make Dr Who's signature synth lead on any virtual analog soft synth or hardware synth; in fact, it's the perfect sound to try to emulate when you're learning your way around a synthesizer. Just choose one that has a sine wave as a waveform option on at least two oscillators. I used Wayoutware's TimewARP 2600, a nifty virtual analog reproduction of the classic ARP 2600 semi-modular synthesizer.

1. Start with a sine wave on Oscillator 1. This gives you almost the entire lead sound.

2. There's a slightly more "twinkly" sound subtly layered in with the lead; I achieved this by using the 2600's ring modulator. A ring modulator sums two signals together, but only outputs the "difference" frequencies. This often results in all manner of sideband noise madness, but here I'm just combining Osc 1 and 2 and mixing it in a tiny bit. I did this by taking Osc 1's saw out and routing it to one of the ring mod ins, and the setting Osc 2 to "low" frequency LFO mode and routing it to ring mod input two. If your synth doesn't have ring mod, you could achieve a similar effect by setting Osc 2 an octave up from the first one, and using a bit of LFO tremolo (or even vibrato) on it. The secret is that the second oscillator needs to stay very quiet in the mix.

3. Add lots of portamento (also known as "glide") to recreate the Dr. Who swooping sound. You can experiment with the time; on TimewARP 2600, I found 0.164 seconds worked well.

4. Don't use any filter envelope at all, and set the amplitude envelope like a standard organ-type on-off shape. Use a medium attack so it doesn't click on, but zero decay, full sustain, and quick release.

5. Add plenty of good and cheesy spring reverb. I used TimewARP 2600's built-in "reverberator; turned all the way up.

Finally, I totally cheated and used Audio Damage's awesome Fluid chorus plug-in the insert. For fun, I threw together a little mock arrangement of the Dr. Who theme. I created the bassline at the top by using a single-note electric guitar sample with Log' Audio's Pitch Shifter II plug doing duty as an octaver — warbly! Until next month, be the lookout for those nasty Daleks!

You can listen to audio samples of the patch as well as my simple arrangement at www.keyboardmag.com or www.celebutantemusic.com/keybmaq. You can also download my "Dr. Who" patch for use with Way Out Ware's TimewARP 2600 synth plug-in.