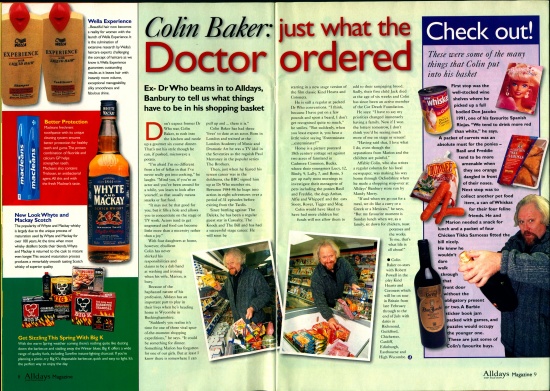 Ex- Dr Who beams in to Alldays, Banbury to tell us what things have to be in his shopping basket

Don't expect former Dr Who star, Colin Baker, to rush into the kitchen and rustle up a gourmet six course dinner. That's not his style though he can, if pushed, microwave a potato.

"I'm afraid I'm no different from a lot of fellas in that I've never really got into cooking," he laughs. "Mind you, if you're an actor and you've been around for a while, you learn to look after yourself, so that usually means snacks or fast food.

"It may not be that good for you, but it fills a hole and allows you to concentrate on the stage or TV work. Actors tend to get engrossed and food can become little more than a necessity rather than a joy."

With four daughters at home, however, ebullient Colin has never shirked his responsibilities and claims to be a dab hand at washing and ironing when his wife, Marion, is busy.

Because of the haphazard nature of his profession, Alldays has an important part to play in

their lives when he's heading home to Wycombe in Buckinghamshire.

"Suddenly you realise it's time for one of those vital spur-of-the-moment shopping expeditions," he says. "It could be something for dinner. Something Marion has forgotten for one of our girls. But at least I know there is somewhere I can pull up and ... there it is."

Colin Baker has had three 'lives' to date as an actor. Born in London and trained at the London Academy of Music and Dramatic Art he was a TV idol in the Seventies as the roguish Paul Merroney in the popular series The Brothers.

Then, just when he feared his screen career was in the doldrums, the BBC signed him up as Dr Who number six. Between 1984-86 he leapt into action in eight adventures over a period of 31 episodes before exiting from the Tardis.

Since battling against The Daleks, he has been a regular guest star in Casualty, The Knock and The Bill and has had a successful stage career. He will soon be starring in a new stage version of the film classic Kind Hearts and Coronets.

He is still a regular at packed Dr Who conventions. "I think, because I have put on a few pounds and sport a beard, I don't get recognised quite so much," he smiles. "But suddenly, when you least expect it, you hear a little voice saying 'Exterminate ...exterminate!'"

Home is a picture postcard 18th century cottage set against two acres of farmland in Cadmore Common, Bucks, where their youngsters Lucy, 12, Bindy, 9, Lally, 7, and Rosie, 5 get up early most mornings to investigate their menagerie of pets including the ponies Basil and Freddie, the dogs Arthur, Alfie and Whippet! and the cats Sooty, Rover, Tigger and Mog.

Colin would have liked to have had more children but funds will not allow them to add to their rampaging brood. Sadly, their first child Jack died at the age of six weeks and Colin has since been an active member of the Cot Death Foundation.

He says: "I have to say my priorities changed immensely having a family. Now if I won the lottery tomorrow, I don't think you'd be seeing much more of me on stage or screen!

"Having said that, I love what I do, even though the separations from Marion and the children are painful."

Affable Colin, who also writes a regular column for his local newspaper, was making his way home through Oxfordshire when he made a shopping stop-over at Alldays' Banbury store run by Mandy Merry.

"If and when we go out for a meal, we do like a curry or a Greek or a Mexican," he says, "But my favourite moment is Sunday lunch when we, as a family, sit down for chicken, roast potatoes and the works. To me, that's what life is all about!"

Colin Baker co-stars with Robert Powell in the play Kind Hearts and Coronets which will be on tour in Britain from late February through to the end of July with dates in Richmond, Guildford, Chichester, Cardiff, Edinburgh, Eastbourne and High Wycombe.

First stop was the well-stocked wine shelves where he picked up a full bodied Don Jacobo 1991, one of his favourite Spanish Riojas. "We tend to drink more red than white," he says.

A packet of carrots was an absolute must for the ponies —Basil and Freddie tend to be more amenable when they see orange dangled in front of their noses.

Next stop was to collect another pet food item, a can of Whiskas for their four feline friends. He and Marion needed a snack for lunch and a packet of four Chicken Tikka Samosas fitted the bill nicely. He knew he wouldn't dare walk through that front door without the obligatory present or two. A Barbie sticker book jam packed with games, and puzzles would occupy the younger one. These are just some of Colin's favourite buys.