College essays? I'd rather watch 'Doctor Who' 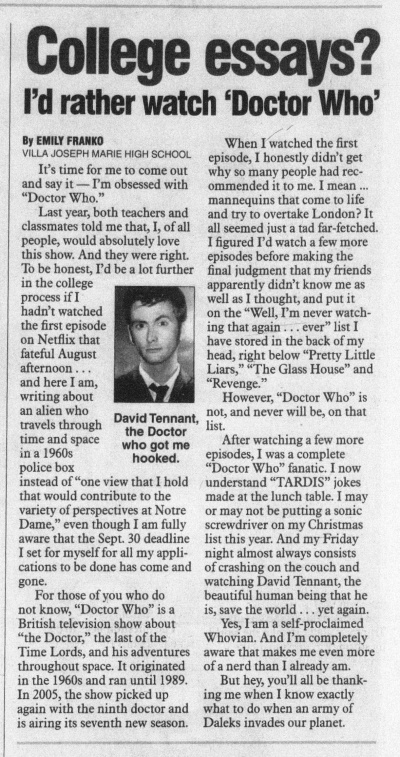 College essays? I'd rather watch 'Doctor Who'

It's time for me to come out and say it — I'm obsessed with "Doctor Who."

Last year, both teachers and classmates told me that, I, of all people, would absolutely love this show. And they were right. To be honest, I'd be a lot further in the college process if I hadn't watched the first episode on Netflix that fateful August afternoon ... and here I am, writing about an alien who travels through time and space in a 1960s police box instead of "one view that I hold that would contribute to the variety of perspectives at Notre Dame," even though I am fully aware that the Sept. 30 deadline I set for myself for all my applications to be done has come and gone.

For those of you who do not know, "Doctor Who" is a British television show about "the Doctor," the last of the Time Lords, and his adventures throughout space. It originated in the 1960s and ran until 1989. In 2005, the show picked up again with the ninth doctor and is airing its seventh new season.

When I watched the first episode, I honestly didn't get why so many people had recommended it to me. I mean ... mannequins that come to life and try to overtake London? It all seemed just a tad far-fetched. I figured I'd watch a few more episodes before making the final judgment that my friends apparently didn't know me as well as I thought, and put it on the "Well, I'm never watching that again . .. ever" list I have stored in the back of my head, right below "Pretty Little Liars," "The Glass House" and "Revenge."

However, "Doctor Who" is not, and never will be, on that list.

After watching a few more episodes, I was a complete "Doctor Who" fanatic. I now understand "TARDIS" jokes made at the lunch table. I may or may not be putting a sonic screwdriver on my Christmas list this year. And my Friday night almost always consists of crashing on the couch and watching David Tennant, the beautiful human being that he is, save the world .. . yet again.

Yes, I am a self-proclaimed Whovian. And I'm completely aware that makes me even more of a nerd than I already am.

But hey, you'll all be thanking me when I know exactly what to do when an army of Daleks invades our planet.

Caption: David Tennant, the Doctor who got me hooked.