College journalist gets her interview 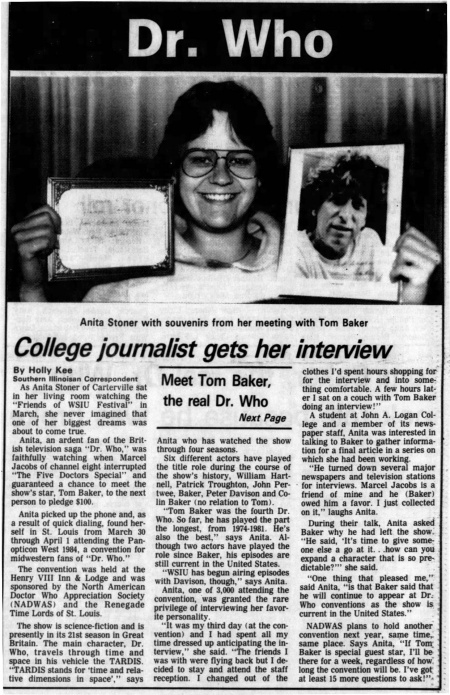 As Anita Stoner of Carterville sat in her living room watching the "Friends of WSIU Festival" it March, she never imagined that one of her biggest dreams was about to come true.

Anita, an ardent fan of the British television saga "Dr. Who," was faithfully watching when Marcel Jacobs of channel eight interrupted "The Five Doctors Special" and guaranteed a chance to meet the show's star, Tom Baker, to the next person to pledge $100.

Anita picked up the phone and, as a result of quick dialing, found herself in St. Louis from March 30 through April 1 attending the Panopticon West 1984, a convention for midwestern fans of "Dr. Who."

The convention was held at the Henry VIII Inn & Lodge and was sponsored by the North American Doctor Who Appreciation Society (NADWAS) and the Renegade Time Lords of St. Louis.

The show is science-fiction and is presently in its 21st season in Great Britain. The main character, Dr. Who, travels through time and space in his vehicle the TARDIS. "TARDIS stands for 'time and relative dimensions in space'," says Anita who has watched the show through four seasons.

"Tom Baker was the fourth Dr. Who. So far, he has played the part the longest, from 1974-1981. He's also the best," says Anita. Although two actors have played the role since Baker, his episodes are still current in the United States.

"WSIU has begun airing episodes with Davison, though," says Anita.

Anita, one of 3,000 attending the convention, was granted the rare privilege of interviewing her favorite personality.

"It was my third day (at the convention) and I had spent all my time dressed up anticipating the interview," she said. "The friends I was with were flying back but I decided to stay and attend the staff reception. I changed out of the clothes I'd spent hours shopping for for the interview and into something comfortable. A few hours later I sat on a couch with Tom Baker doing an interview!"

A student at John A. Logan College and a member of its newspaper staff, Anita was interested in talking to Baker to gather information for a final article in a series on which she had been working.

"He turned down several major newspapers and television stations for interviews. Marcel Jacobs is a friend of mine and he (Baker) owed him a favor. I just collected on it." laughs Anita.

During their talk. Anita asked Baker why he had left the show. "He said, 'It's time to give someone else a go at it...how can you expand a character that is so predictable?"' she said.

"One thing that pleased me," said Anita, "is that Baker said that he will continue to appear at Dr. Who conventions as the show is current in the United States."

NADWAS plans to hold another convention next year. same time. same place. Says Anita, "If Tom Baker is special guest star, I'll be there for a week, regardless of how long the convention will be. I've got at least 15 more questions to ask!"

Meet Tom Baker, the real Dr. Who Next Page

Caption: Anita Stoner with souvenirs from her meeting with Tom Baker