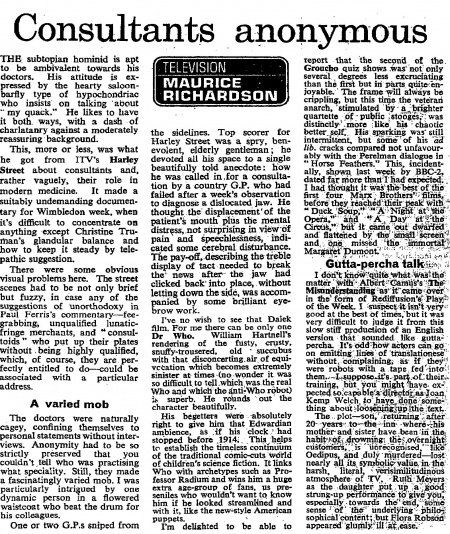 I've no wish to see that Dalek film. For me there can be only one Dr Who. William Hartnell's rendering of the fusty, crusty, snuffy-trousered, old succubus with that disconcerting air of equivocation which becomes extremely sinister at times (no wonder it was so difficult to tell which was the real Who and which the anti-Who robot) is superb. He rounds out the character beautifully.

His begetters were absolutely right to give him that Edwardian ambience, as if his clock had stopped before 1914. This helps to establish the timeless continuum of the traditional comic-cuts world of children's science fiction. It links Who with archetypes such as Professor Radium and wins him a huge extra age-group of fans, us pre-seniles who wouldn't want to know him if he looked streamlined and with it, like the new-style American puppets.