Couple makes time for a wedding with a 'Dr. Who' theme 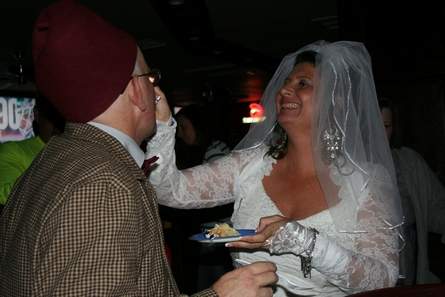 No image available. However there is a transcription available.

Do you have an image? Email us: whovian@cuttingsarchive.org

FLAGLER BEACH — Finn's Beachside Pub was transformed into a scene from the popular British sci-fi television show "Dr. Who" as well over 100 people, many in costume, celebrated the wedding of "The Doctor" and "River Song," alter-egos of Palm Coast residents Bob "BP" Pickering and MaryAnn Kochanko, last week.

It was a wedding that will not soon be forgotten.

By day, Pickering is a Flagler County emergency management technician and self-proclaimed "weather geek" dedicated to keeping the citizens of Flagler County informed and safe. His bride, Kochanko-Pickering, is a medical auditor for a large national company. Both volunteer with a number of organizations that provide communications and support services to the county's law enforcement, emergency services, and other agencies, including the National Weather Service.

Both also take their jobs and their volunteer work seriously — but when they're not working, they take their fun equally as seriously.

The couple met in 2011 via Facebook. Neither was in the market for a mate at the time, but they found they had a lot of the same interests and began chatting. One thing led to another and they arranged to meet at the Golden Lion in Flagler Beach.

"After that, we went for a walk to the pier and back. We didn't stop talking. The chemistry was amazing," said Pickering. "I wasn't hunting, but then MaryAnn came into my life."

Both love music and express it in different ways. Pickering is known for flamboyant karaoke performances and enthusiastic dance moves.

"I've been doing karaoke since 2009," he said. Kochanko-Pickering's form of musical expression is belly dancing.

"I saw some belly dancers perform on the beach. I'd always wanted to do that," she said, "So when I hit 50, I took belly dancing lessons."

She now performs with the Enchanted Caravan Belly Dance Troupe.

But perhaps the most significant nexus for the couple was "Dr. Who." Produced by the BBC, "Dr. Who" is the longest running science-fiction TV show in the world. "I introduced Mary Ann to 'Dr. Who' and she's now an even bigger fan than me," said Pickering with a laugh.

When the two decided to tie the knot, they chose to use "Dr. Who" as the theme and wanted to hold the ceremony on the beach by the Flagler Pier. But the universe had other plans.

Although Pickering has a reputation for being more accurate than most meteorologists, despite popular belief he cannot control the weather. As he predicted earlier, the rains had left the area a few hours before the wedding was set to begin.

"We both are believers that the universe steers you in the right direction. The winds were blowing 20 to 30 miles per hour and two to four foot waves were spitting salt all over the beach," said Pickering.

"As we were heading to the beach, our wedding planner, Donna Heiss, texted me and suggested we go to plan B," Kochanko-Pickering said.

And so they did. They moved the wedding across the street to Finns Beachside Pub.

"There were 'Dr. Who' references everywhere," Pickering said. "We were astounded to see so much 'Dr. Who' stuff in one place."

The wedding party and many of the guests wore "Dr. Who" or related costumes. The groom dressed as the 11th Doctor, complete with bow tie but sans wig, and the bride wore a traditional white salsa-style dress with white boots, "Dr. Who" charm bracelets, and carried River Song's blue journal.

Eric Pickering, brother of the groom, served as best man. Julie Murphy and JoAnna Fiota, both wearing dark blue, were the maids of honor.

The wedding cake, created by Tammy Miller of Palm Coast, featured stellar constellations and was topped by Dr. Who and River Song action figures and the TARDIS, the time machine The Doctor uses to travel through space and time.

"It was my dream cake," said Kochanko-Pickering.

To top it off, Smith, who in addition to being a popular local entertainer is an ordained minister, included Dr. Who references throughout the wedding vows he wrote specially for the Pickerings.

"The wedding was very unique — non-traditional in a sort of way, which I think describes Bob," Smith said. "He is the kind of person that most of want to be, if we're honest with ourselves. There was an outpouring of love from Bob and MaryAnn's friends who support them and were totally in favor of this marriage. It was awesome."

Caption: The wedding of Mary Ann Kochanko and Bob Pickering, center, featured a "Dr. Who" theme as they take as minute to pose with maids of...