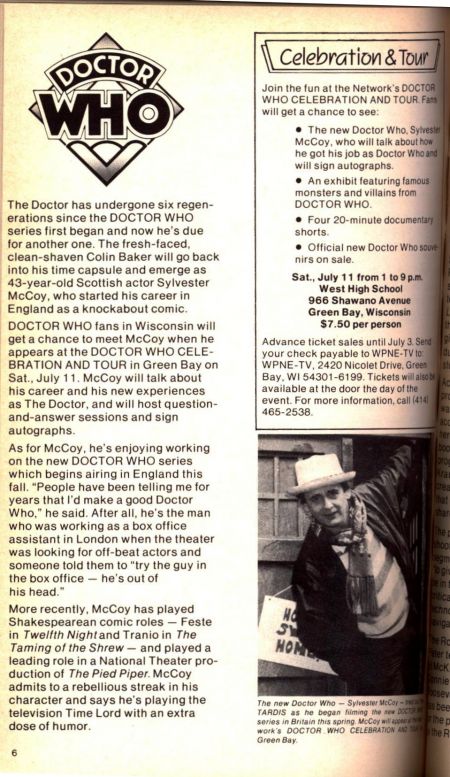 The Doctor has undergone six regenerations since the DOCTOR WHO series first began and now he's due for another one. The fresh-faced, clean-shaven Colin Baker will go back into his time capsule and emerge as 43-year-old Scottish actor Sylvester McCoy, who started his career in England as a knockabout comic.

DOCTOR WHO fans in Wisconsin will get a chance to meet McCoy when he appears at the DOCTOR WHO CELEBRATION AND TOUR in Green Bay on Sat., July 11. McCoy will talk about his career and his new experiences as The Doctor, and will host question-and-answer sessions and sign autographs.

As for McCoy, he's enjoying working on the new DOCTOR WHO series which begins airing in England this fall. "People have been telling me for years that I'd make a good Doctor Who." he said. After all, he's the man who was working as a box office assistant in London when the theater was looking for off-beat actors and someone told them to "try the guy in the box office — he's out of his head."

More recently, McCoy has played Shakespearean comic roles — Feste in Twelfth Night and Tranio in The Taming of the Shrew — and played a leading role in a National Theater production of The Pied Piper. McCoy admits to a rebellious streak in his character and says he's playing the television Time Lord with an extra dose of humor.

Join the fun at the Network's DOCT WHO CELEBRATION AND TOUR. Fans will get a chance to see:

• The new Doctor Who, Sylvester McCoy, who will talk about he got his job as Doctor Who will sign autographs.

• An exhibit featuring famous monsters and villains from DOCTOR WHO.

Advance ticket sales until July 3 Se your check payable to WPNE-TV to: WPNE-TV, 2420 Nicolet Drive, Green Bay, WI 54301-6199. Tickets will also be available at the door the day of the event. For more information, call

Caption: The new Doctor Who — Sylvester McCoy - tried out TARDIS as he began filming the new DOCTOR WHO series in Britain this spring. McCoy will appear at the work's DOCTOR WHO CELEBRATION in Green Bay.