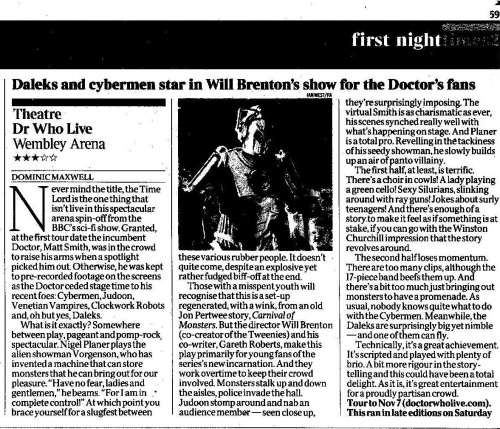 Never mind the title, the Time Lord is the one thing that isn't live in this spectacular arena spin-off from the BBC's sci-fi show. Granted, at the first tour date the incumbent Doctor, Matt Smith, was in the crowd to raise his arms when a spot-light picked him out. Otherwise, he was kept to pre-recorded footage on the screens as the Doctor ceded stage time to his recent foes: Cybermen, Judoon, Venetian Vampires, Clockwork Robots and, oh but yes, Daleks.

What is it exactly? Somewhere between play, pageant and pomp-rock spectacular. Nigel Planer plays the alien show-man Vorgenson, who has invented a machine that can store monsters that he can bring out for our pleasure. "Have no fear, ladies and gentlemen," he beams. "For I am in complete control!" At which point you brace yourself for a slugfest between these various rubber people. It doesn't quite come, despite an explosive yet rather fudged biff-off at the end.

Those with a misspent youth will recognise that this is a set-up regenerated, with a wink, from an old Jon Pertwee story, Carnival of Monsters. But the director Will Brenton (co-creator of the Tweenies) and his co-writer, Gareth Roberts, make this play primarily for young fans of the series's new incarnation. And they work overtime to keep their crowd involved. Monsters stalk up and down the aisles, police invade the hall.

Judoon stomp around and nab an audience member - seen close up, they're surprisingly imposing. The virtual Smith is as charismatic as ever, his scenes synched really well with what's happening on stage. And Planer is a total pro. Revel-ling in the tackiness of his seedy showman, he slowly builds up an air of panto villainy.

The first half, at least, is terrific. There's a choir in cowls! A lady playing a green cello! Sexy Silurians, slinking around with ray guns! Jokes about surly teenagers! And there's enough of a story to make it feel as if something is at stake, if you can go with the Winston Churchill impression that the story revolves around.

The second half loses momentum. There are too many clips, although the 17-piece band beefs them up. And there's a bit too much just bringing out monsters to have a promenade. As usual, nobody knows quite what to do with the Cybermen. Meanwhile, the Daleks are surprisingly big yet nimble - and one of them can fly.

Technically, it's a great achievement. It's scripted and played with plenty of brio. A bit more rigour in the storytelling and this could have been a total delight. As it is, it's great entertainment for a proudly partisan crowd.

Tour to Nov 7 (doctorwholive.com). This ran in late editions on Saturday