Daleks to roll again after all 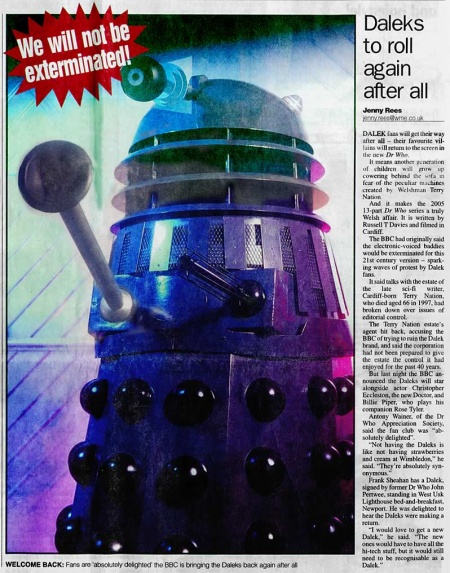 We will not be exterminated

Dalek fans will get their way after all - their favourite villains will return to the screen in the new Dr Who.

It means another generation of children will grow up cowering behind the sofa in fear of the peculiar machines created by Welshman Terry Nation.

And it makes the 2005 13-part Dr Who series a truly Welsh affair. It is written by Russell T Davies and filmed in Cardiff.

The BBC had originally said the electronic-voiced baddies would be exterminated for this 21st century version - sparking waves of protest by Dalek fans.

It said talks with the estate of the late sci-fi writer, Cardiff-born Terry Nation, who died aged 66 in 1997, had broken down over issues of editorial control.

The Terry Nation estate's agent hit back, accusing the BBC of trying to ruin the Dalek brand, and said the corporation had not been prepared to give the estate the control it had enjoyed for the past 40 years.

But last night the BBC announced the Daleks will star alongside actor Christopher Eccleston, the new Doctor, and Billie Piper, who plays his companion Rose Tyler.

Antony Wainer, of the Dr Who Appreciation Society, said the fan club was 'absolutely delighted'.

'Not having the Daleks is like not having strawberries and cream at Wimbledon,' he said. 'They're absolutely synonymous.'

Frank Sheahan has a Dalek, signed by former Dr Who John Pertwee, standing in West Usk Lighthouse bed-and-breakfast, Newport. He was delighted to hear the Daleks were making a return.

'I would love to get a new Dalek,' he said. 'The new ones would have to have all the hi-tech stuff, but it would still need to be recognisable as a Dalek.'