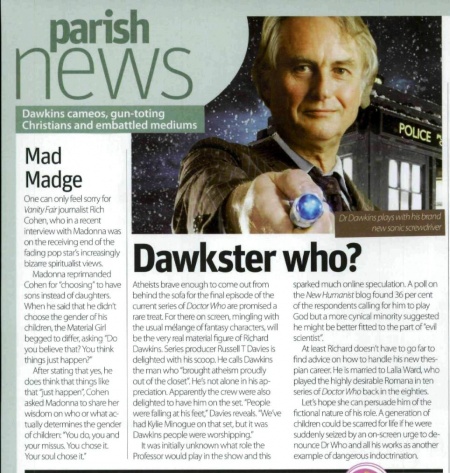 Atheists brave enough to come out from behind the sofa for the final episode of the current series of Doctor Who are promised a rare treat. For there on screen, mingling with the usual mélange of fantasy characters, will be the very real material figure of Richard Dawkins. Series producer Russell T Davies is delighted with his scoop. He calls Dawkins the man who "brought atheism proudly out of the closet" He's not alone in his appreciation. Apparently the crew were also delighted to have him on the set. "People were falling at his feet" Davies reveals. "We've had Kylie Minogue on that set, but it was Dawkins people were worshipping"

It was initially unknown what role the Professor would play in the show and this sparked much online speculation. A poll on the New Humanist blog found 36 per cent of the respondents calling for him to play God but a more cynical minority suggested he might be better fitted to the part of 'evil scientist"

At least Richard doesn't have to go far to find advice on how to handle his new thespian career. He is married to Lalla Ward, who played the highly desirable Romana in ten series of Doctor Who back in the eighties.

Let's hope she can persuade him of the fictional nature of his role. A generation of children could be scarred for life if he were suddenly seized by an on-screen urge to denounce Dr Who and all his works as another example of dangerous indoctrination.