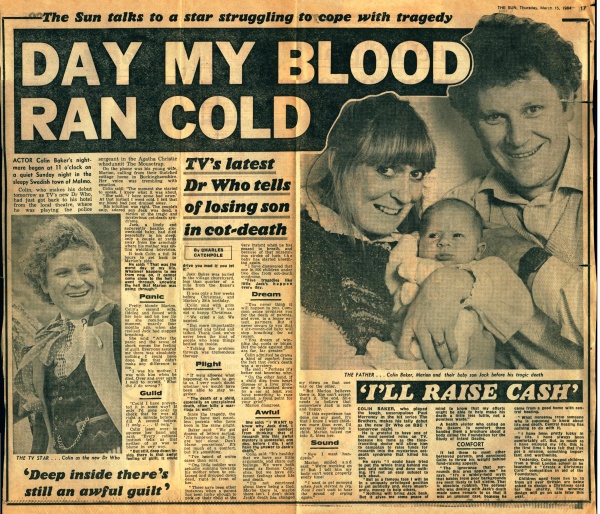 The Sun talks to a star struggling to cope with tragedy

TV's latest Dr Who tells of losing son in cot-death

ACTOR Colin Baker's nightmare began at 11 o'clock on a quiet Sunday night in the sleepy Swedish town of Malmo.

Colin, who makes his debut tomorrow as TV's new Dr Who, had just got back to his hotel from the local theatre, where he was playing the police sergeant in the Agatha Christie whodunnit The Mousetrap.

On the phone was his young wife, Marion, calling from their thatched cottage home in Buckinghamshire. Her voice was trembling with emotion.

Colin said: "The moment she started to speak. I knew what it was about.

"She said, 'I have some bad news.' At that instant I went cold. I felt that my blood had just drained away.

His intuition was right. The couple's only, adored son Jack was dead, a victim of the tragic and mysterious cot-death syndrome.

Jack, a lively and apparently healthy six-week-old baby, had died peacefully in his sleep. only a couple of yards away from the armchair where his mother was sitting watching television.

It took Colin a full 24 hours to get back to Marion's side.

He said: "That was the worst day of my life. Whatever happens to me from now on, it cannot come close to the hell I went through, knowing the hell that Marion was going through."

Pretty blonde Marion, Colin's second wife, fiddled and fussed with her hair and bit her lip as she recalled the moment, exactly four months ago, when she realised Jack had stopped breathing.

She said: " After the panic and the sense of shock comes the feeling of guilt. Everyone assured me there was absolutely nothing I could have done. But that didn't make any difference to me.

"I was his mother. I was with him when he died. Over and over again I said to myself, 'What did I do wrong?'

"Could I have prevented it in some way? If only I'd gone over to check that he was all right a minute before I did. A second before. If only ... if only."

Colin leant over to squeeze her hand and said: "Every rational instinct tells us that neither of us was to blame in any way.

"But still, deep down Inside there Is that awful feeling of guilt. It could drive you mad If you let it."

Jack Baker was buried in the village churchyard, less than quarter of a mile from the Baker's home.

It was only a few weeks before Christmas, and Marion's 29th birthday.

Colin said with grim understatement: "It was not a happy Christmas.

"We cried a lot. We bawled.

"But more importantly we talked and talked and talked. Thank God, we've never been the kind of people who keep things bottled up inside. "Talking the problem through was tremendous therapy.

"If we'd allowed what happened to Jack to get to us, I very much doubt whether we would have been able to stay together.

"The death of a child, especially an unexplained death, often kills a marriage as well."

Since the tragedy, the Bakers have met countless parents who have been in the same plight.

Baker said: "We got dozens of letters saying, 'It's happened to us. You are not alone. Don't blame yourselves.' It's not much of a comfort, but it's something.

"I've heard of worse cases than ours.

"One little toddler was actually running towards his mother when he collapsed and dropped down dead, right in front of her.

"There have been other instances when a parent has been lucky enough to pick up their child at the very Instant when he has ceased to breath, and because of that miraculous stroke of luck, the baby has started breathing again.

"I have discovered that one in 500 children under two dies from cot-death syndrome.

"You never think it will happen to you. Common sense prepares you for the death of parents, and even, to a lesser extent, partners. But it never occurs to you that a six-month-old baby will stop breathing for no reason.

"You dream of winning the pools or bingo. But the odds against that are far, far greater."

Colin admitted he draws a kind of comfort from the fact that Jack's death was a mystery.

He said : "Perhaps it's better not knowing why.

"On the other hand, if a child dies from heart disease or a liver problem or is knocked down by a car at least you have something to rage against, a focal point for your grief."

She said: "I WANT to know why Jack died, I get a certain comfort from thinking that If research Into this awful mystery is successful, one day, before I die. I will have the answer to Jack's death."

Colin said: "It's healthy that we have our little arguments, and share our feelings. We were both raised as Roman Catholics, but we have different feelings about life and death.

"I'm not convinced about there being a God. Maybe there is, maybe there isn't. I don't think Jack's death has changed my views on that one way or the other.

"But Marion believes there is. She can't accept that's it. The end. She needs to believe that somewhere Jack is safe and happy.

"If this experience has done me any good, it's that I know I want children more than ever. I'd never really wanted a child. Marion talked me into it, bless her.

Marion smiled and said: " We're working on it! But I tell him my body can't work properly every time!

"I used to get annoyed when Jack started to cry. Now I can't wait to hear the sound of crying again."

COLIN BAKER, who played the tough, unscrupulous Paul Merroney in the hit series The Brothers, makes his telly debut as the new Dr Who on BBC 1 tomorrow night.

He is grateful to have one of the most coveted roles on TV. because his fame as the time-travelling doctor will allow him to campaign to raise funds for research into the mysterious cot-death syndrome that killed his son.

He says: "I could have tried to put the whole thing behind me and said nothing and done nothing. It's not an easy subject to talk about.

"But as a famous face I will be in a uniquely privileged position to get publicity and, more importantly, money to help others.

"Nothing will bring Jack back. But it gives me some peace of mind to know that my efforts might be able to help make his death a little less futile, not a pointless waste."

A health visitor who called on the Bakers to comfort them handed them a brochure about a body called the Foundation for the Study of Infant Deaths.

It led them to meet other bereaved parents, and convinced Colin to throw his weight behind fund-raising appeals.

"The ignorance that surrounds this area appals me" he says. " It's a widely-held myth that babies from poor backgrounds are most likely to fall victim. That is absolute rubbish. The coroner who was dealing with Jack's death made some remark to us that it was an unusual case, because he came from a good home with central heating.

"What nonsense from someone who Is supposed to know about life and death. Central heating has nothing to do with it.

"I have been pretty lucky in my life. I have always been comfortably off. But, as much as I have enjoyed my life, this is the first time I have felt that I've got a mission, something important and worthwhile.

Yesterday, Colin hugged children from a West London school as he launched a "Create a Christmas Card" competition in aid of the Foundation.

Children aged from five to 15 from all over Britain are being asked to design a Christmas card for the charity. The winning design will go on sale later this year,

THE FATHER ... Colin Baker, Marion and their baby son Jack before his tragic death