Dead, but they won't lie down 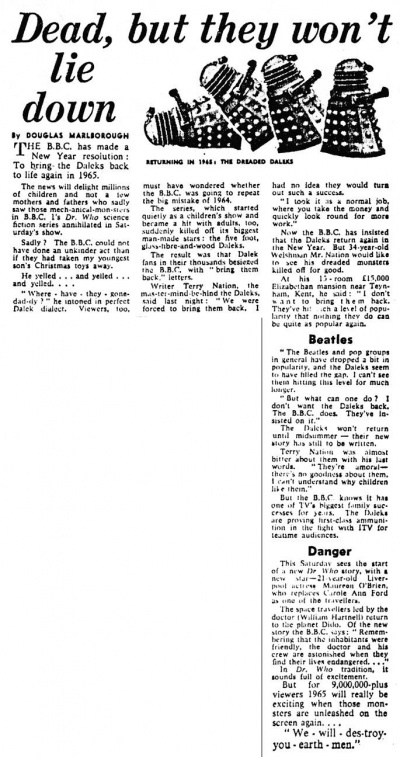 THE B.B.C. has made a New Year resolution : To bring the Daleks back to life again in 1965.

The news will delight millions of children and not a few mothers and fathers who sadly saw those mechanical-monsters in B.B.C. 1's Dr. Who science fiction series annihilated in Saturday's show.

Sadly ? The B.B.C. could not have done an unkinder act than if they had taken my youngest son's Christmas toys away.

"Where - have - they - gone - dad-dy" he intoned in perfect Dalek dialect. Viewers, too, must have wondered whether the B.B.C. was going to repeat the big mistake of 1964.

The series, which started quietly as a children's show and became a hit with adults, too, suddenly killed off its biggest manmade stars: the five foot, glass-fibre-and-wood Daleks.

The result was that Dalek fans in their thousands besieged the B.B.C. with "bring them back" letters.

Writer Terry Nation, the mas-ter-mind-be-hind the Daleks, said last night : "We were forced to bring them back. I had no idea they would turn out such a success.

"I took it as a normal job, where you take the money and quickly look round for morw work."

Now the B.B.C. has insisted that the Daleks return again in the New Year. But 34-year-old Welshman Mr. Nation would like to see his dreaded monsters killed off for good.

At his 15-room £15,000 Elizabethan mansion near Teynham, Kent. he said : "I don't want to bring them back. They've ... a level of popularity that nothing they do can be quite as popular again.

"The Beatles and pop groups in general have dropped a bit to popularity. and the Daleks seem to have tilled the gap. I can't see them hitting this level for much longer.

The Daleks won't return until midsummer — their new story has still to be written.

Terry Nation was almost bitter about them with his last words. "They're amoral--there's no goodness about them. I can't understand why children like them."

But the B.B.C knows it has one of TV's biggest family successes for years. The Daleks are proving first-class ammunition in the fight with ITV for teatime audiences.

This Saturday sees the start of a new Dr Who story, with a new star-—21-year-old Liverpool actress Maureen O'Brien, who replaces Carole Ann Ford as one of the travellers.

The space travellers led by the doctor (William Hartnell) return to the planet Dido. Of the new story the B.B.C. says: "Remembering that the inhabitants were friendly, the doctor and his crew are astonished when they find their lines endangered...."

In Dr. Who tradition, it sounds full of excitement.

But for 9,000,000-plus viewers 1965 will really be exciting when those monsters are unleashed on the screen again....