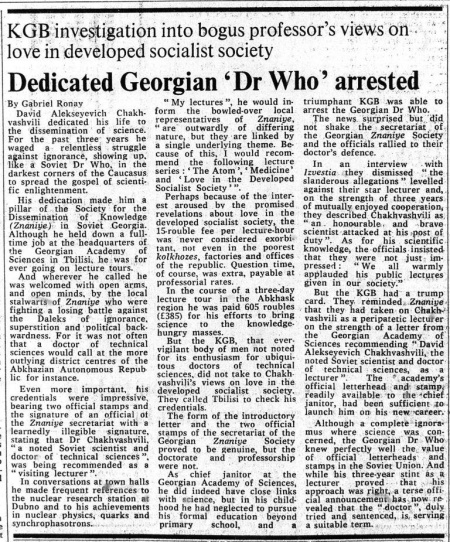 David Alekseyevich Chakhvashvili dedicated his life to the dissemination of science. For the past three years he waged a relentless struggle against ignorance, showing up, like a Soviet Dr Who, in the darkest corners of the Caucasus to spread the gospel of scientific enlightenment.

His dedication made him a pillar of the Society for the Dissemination of Knowledge (Znaniye), in Soviet Georgia. Although he held down a full-time job at the headquarters of the Georgian Academy of Sciences in Tbilisi, he was for ever going on lecture tours.

And wherever he called he was welcomed with open arms, and open minds, by the local stalwarts of Znaniye who were fighting a losing battle against the Daleks of ignorance, superstition and political backwardness. For it was not often that a doctor of technical sciences would call at the more outlying district centres of the Abkhazian Autonomous Republic for instance.

Even more important, his credentials were impressive, bearing two official stamps and the signature of an official of the Znaniye secretariat with a learnedly illegible signature, stating that Dr Chakhvashvili, "a noted Soviet scientist and doctor of technical sciences", was being recommended as a "visiting lecturer."

In conversations at town halls he made frequent references to the nuclear research station at Dubno and to his achievements in nuclear physics, quarks and synchrophasotrons.

"My lectures", he would inform the bowled-over local representatives of Znaniye, "are outwardly of differing nature, but they are linked by a single underlying theme. Because of this, I would recommend the following lecture series : 'The Atom', 'Medicine' and 'Love in the Developed Socialist Society'".

Perhaps because of the interest aroused by the promised revelations about love in the developed socialist society, the 15-rouble fee per lecture-hour was never considered exorbitant, not even in the poorest kolkhozes, factories and offices of the republic. Question time, of course, was extra, payable at professorial rates.

In the course of a three-day lecture tour in the Abkhask region he was paid 605 roubles (£385) for his efforts to bring science to the knowledge-hungry masses.

But the KGB, that ever-vigilant body of men not noted for its enthusiasm for ubiquitous doctors of technical sciences, did not take to Chakhvashvili's views on love in the developed socialist society. They called Tbilisi to check his credentials.

The form of the introductory letter and the two official stamps of the secretariat of the Georgian Znaniye Society proved to be genuine, but the doctorate and professorship were not.

As chief janitor at, the Georgian Academy of Sciences, he did indeed have close links with science, but in his childhood he had neglected to pursue his formal education beyond primary school, and a triumphant KGB was able to arrest the Georgian Dr Who.

The news surprised but did not shake the secretariat of the Georgian Znaniye Society and the officials rallied to their doctor's defence.

In an interview with Izvestia they dismissed "the slanderous allegations" against their star lecturer and, on the strength of three years of mutually enjoyed cooperation, they described Chakhvashvili as, "an honourable and brave scientist attacked at his post of duty". As for his scientific knowledge, the officials insisted that they were not just impressed : " We all warmly applauded his public. lectures given in our scciety:",

But the KGB had a trump card. They reminded Znaniye that they had taken on Chakhvashvili as a peripatetic lecturer on the strength of a letter from the Georgian Academy of Sciences recommending " David Alekseyevich Chakhvashvili, the noted Soviet scientist and doctor of technical sciences, as lecturer". The academy's official letterhead and stamp readily available to the chief janitor, had been sufficient to launch him on his new career.

Although a complete ignoramus where science was concerned, the Georgian Dr. Who knew perfectly well the value of official letterheads and stamps in the Soviet Union. And while his three-year stint as a lecturer proved that his approach was right, a terse official announcement has now revealed that the "doctor", duly tried and sentenced, is serving a suitable term.