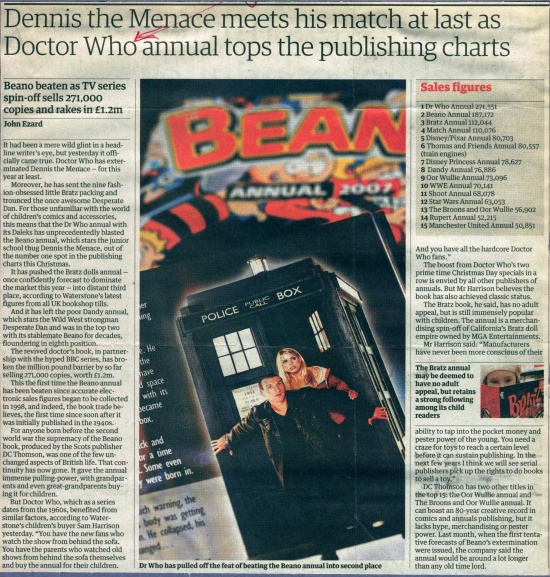 It had been a mere wild glint in a headline writer's eye, but yesterday it officially came true. Doctor Who has exterminated Dennis the Menace — for this year at least.

Moreover, he has sent the nine fashion-obsessed little Bratz packing and trounced the once awesome Desperate Dan. For those unfamiliar with the world of children's comics and accessories, this means that the Dr Who annual with its Daleks has unprecedentedly blasted the Beano annual, which stars the junior school thug Dennis the Menace, out of the number one spot in the publishing charts this Christmas.

It has pushed the Bratz dolls annual —once confidently forecast to dominate the market this year — into distant third place, according to Waterstone's latest figures from all UK bookshop tills.

And it has left the poor Dandy annual, which stars the Wild West strongman Desperate Dan and was in the top two with its stablemate Beano for decades, floundering in eighth position.

The revived doctor's book, in partnership with the hyped BBC series, has broken the million pound barrier by so far selling 271,000 copies, worth £1.2m.

This the first time the Beano annual has been beaten since accurate electronic sales figures began to be collected in 1998, and indeed, the book trade believes, the first time since soon after it was initially published in the 1940s.

For anyone born before the second world war the supremacy of the Beano book, produced by the Scots publisher DC Thomson, was one of the few unchanged aspects of British life. That continuity has now gone. It gave the annual immense pulling-power, with grandparents and even great-grandparents buying it for children.

But Doctor Who, which as a series dates from the 1960s, benefited from similar factors, according to Water-stone's children's buyer Sam Harrison yesterday. "You have the new fans who watch the show from behind the sofa. You have the parents who watched old shows from behind the sofa themselves and buy the annual for their children. And you have all the hardcore Doctor Who fans."

The boost from Doctor Who's two prime time Christmas Day specials in a row is envied by all other publishers of annuals. But Mr Harrison believes the book has also achieved classic status.

The Bratz book, he said, has no adult appeal, but is still immensely popular with children. The annual is a merchandising spin-off of California's Bratz doll empire owned by MGA Entertainments.

Mr Harrison said: "Manufacturers have never been more conscious of their ability to tap into the pocket money and pester power of the young. You need a craze for toys to reach a certain level before it can sustain publishing. In the next few years I think we will see serial publishers pick up the rights to do books to sell a toy."

DC Thoinson has two other titles in the top 15: the Oor Wullie annual and The Broons and Oor Wullie annual. It can boast an 80-year creative record in comics and annuals publishing, but it lacks hype, merchandising or pester power. Last month, when the first tentative forecasts of Beano's extermination were issued, the company said the annual would be around a lot longer than any old time lord.

Caption: Dr Who has pulled off the feat of beating the Beano annual into second place