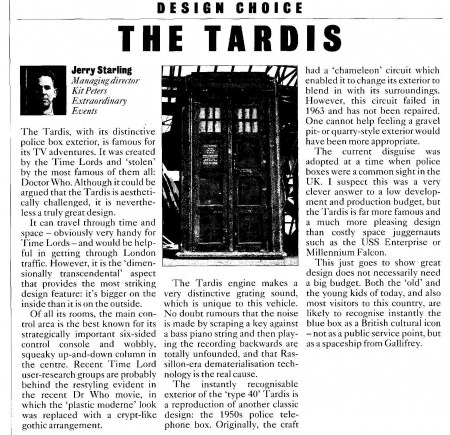 The Tardis, with its distinctive police box exterior, is famous for its TV adventures. It was created by the Time Lords and 'stolen' by the most famous of them all: Doctor Who. Although it could be argued that the Tardis is aesthetically challenged, it is nevertheless a truly great design.

It can travel through time and space — obviously very handy for Time Lords—and would be helpful in getting through London traffic. However, it is the 'dimensionally transcendental' aspect that provides the most striking design feature: it's bigger on the inside than it is on the outside.

Of all its rooms, the main control area is the best known for its strategically important six-sided control console and wobbly, squeaky up-and-down column in the centre. Recent Time Lord user-research groups are probably behind the restyling evident in the recent Dr Who movie, in which the 'plastic moderne' look was replaced with a crypt-like gothic arrangement.

The Tardis engine makes a very distinctive grating sound, which is unique to this vehicle. No doubt rumours that the noise is made by scraping a key against a bass piano string and then playing the recording backwards are totally unfounded, and that Rassillon-era dematerialisation technology is the real cause.

The instantly recognisable exterior of the 'type 40' Tardis is a reproduction of another classic design: the 1950s police telephone box. Originally, the craft had a 'chameleon' circuit which enabled it to change its exterior to blend in with its surroundings. However, this circuit failed in 1963 and has not been repaired. One cannot help feeling a gravel pit- or quarry-style exterior would have been more appropriate.

The current disguise was adopted at a time when police boxes were a common sight in the UK. I suspect this was a very clever answer to a low development and production budget, but the Tardis is far more famous and a much more pleasing design than costly space juggernauts such as the USS Enterprise or Millennium Falcon.

This just goes to show great design does not necessarily need a big budget. Both the 'old' and the young kids of today, and also most visitors to this country, are likely to recognise instantly the blue box as a British cultural icon — not as a public service point, but as a spaceship from Gallifrey.