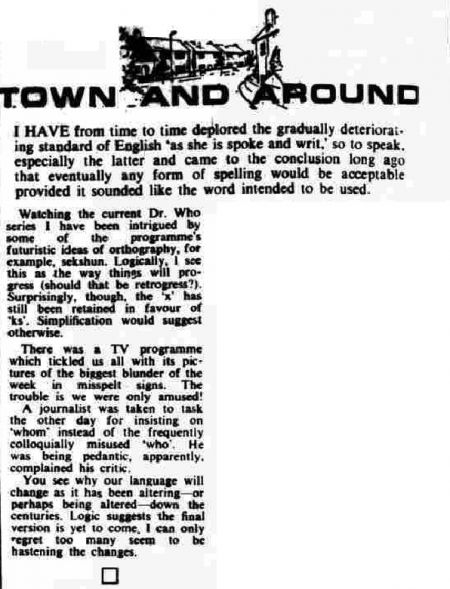 I HAVE from time to time deplored the gradually deteriorating standard of English 'as she is spoke and writ,' so to speak, especially the latter and came to the conclusion long ago that eventually any form of spelling would be acceptable provided it sounded like the word intended to be used.

Watching the current Dr. Who series have been intrigued by some of the programmes futuristic ideas of orthography, for example, sekshun. Logically, I see this as the way things will progress (should that be retrogress?). Surprisingly, though, the 'x' has still been retained in favour of 'ks'. Simplification would suggest otherwise.

There was a TV programme which tickled us all with its pictures of the biggest blunder of the week in misspelt signs. The trouble is we were only amused!

A journalist was taken to task the other day for insisting on 'whom' instead of the frequently colloquially misused 'who'. He was being pedantic, apparently. complained his critic.

You see why our language will change as it has been altering—or perhaps being altered—down the centuries. Logic suggests the final version is yet to come. I can only regret too many seem to be hastening the changes.