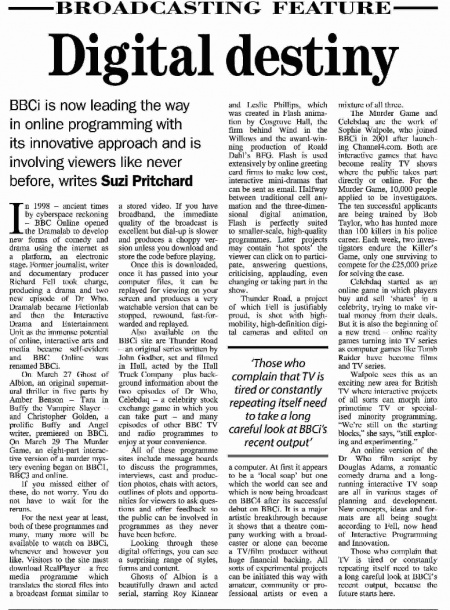 BBCi is now leading the way in online programming with its innovative approach and is involving viewers like never before, writes Suzi Pritchard

In 1998 — ancient times by cyberspace reckoning — BBC Online opened the Dramalab to develop new forms of comedy and drama using the internet as a platform, an electronic stage. Former journalist, writer and documentary producer Richard Fell took charge, producing a drama and two new episode of Dr Who. Dramalab became Fictionlab and then the Interactive Drama and Entertainment Unit as the immense potential of online, interactive arts and media became self-evident and BBC Online was renamed BBCi.

On March 27 Ghost of Albion, an original supernatural thriller in five parts by Amber Benson — Tara in Buffy the Vampire Slayer —and Christopher Golden, a prolific Bully and Angel writer, premiered on BBCi. On March 29 The Murder Game, an eight-part interactive version of a murder mystery evening began on BBC1, BBC3 and online.

If you missed either of these, do not worry. You do not have to wait for the reruns.

For the next year at least, both of these programmes and many, many more will be available to watch on BBCi, whenever and however you like. Visitors to the site must download RealPlayer — a free media programme which translates the stored files into a broadcast format similar to a stored video. If you have broadband, the immediate quality of the broadcast is excellent but dial-up is slower and produces a choppy version unless you download and store the code before playing.

Once this is downloaded, once it has passed into your computer files, it can be replayed for viewing on your screen and produces a very watchable version that can be stopped, rewound, fast-forwarded and replayed.

Also available on the BBCi site are Thunder Road — an original series written by John Godber, set and filmed in Hull, acted by the Hull Truck Company — plus background information about the two episodes of Dr Who, Celebdaq — a celebrity stock exchange game in which you can take part — and many episodes of other BBC TV and radio programmes to enjoy at your convenience.

All of these programme sites include message boards to discuss the programmes, interviews, cast and production photos, chats with actors, outlines of plots and opportunities for viewers to ask questions and offer feedback so the public can be involved in programmes as they never have been before.

Looking through these digital offerings, you can see a surprising range of styles, forms and content.

Ghosts of Albion is a beautifully drawn and acted serial, starring Roy Kinnear and Leslie Phillips, which was created in Flash animation by Cosgrove Hall, the firm behind Wind in the Willows and the award-winning production of Roald Dahl's BFG. Flash is used extensively by online greeting card firms to make low cost, interactive mini-dramas that can be sent as email. Halfway between traditional cell animation and the three-dimensional digital animation, Flash is perfectly suited to smaller-scale, high-quality programmes. Later projects may contain tot spots' the viewer can click on to participate, answering questions, criticising, applauding, even changing or taking part in the show.

Thunder Road, a project of which Fell is justifiably proud, is shot with high-mobility, high-definition digital cameras and edited on a computer. At first it appears to be a 'local soap' but one which the world can see and which is now being broadcast pn BBC4 after its successful debut on BBCi. It is a major artistic breakthrough because it shows that a theatre company working with a broadcaster or alone can become a TV/film producer without huge financial backing. All sorts of experimental projects can be initiated this way with amateur, community or professional artists or even a mixture of all three.

The Murder Game and Celebdaq are the work of Sophie Walpole, who joined BBCi in 2001 after launching Channel4.com. Both are interactive games that have become reality TV shows where the public takes part directly or online. For the Murder Game, 10,000 people applied to be investigators. The ten successful applicants are being trained by Bob Taylor, who has hunted more than 100 killers in his police career. Each week, two investigators endure the Killer's Game, only one surviving to compete for the £25,000 prize for solving the case.

Celebdaq started as an online game in which players buy and sell 'shares' in a celebrity, trying to make virtual money from their deals. But it is also the beginning of a new trend — online reality games turning into TV series as computer games like Tomb Raider have become films and TV series.

Walpole sees this as an exciting new area for British TV where interactive projects of all sorts can morph into primetime TV or specialised minority programming 'We're still on the starting blocks," she says, "still exploring and experimenting."

An online version of the Dr Who film script by Douglas Adams, a romantic comedy drama and a long-running interactive TV soap are all in various stages of planning and development. New concepts, ideas and formats are all being sought according to Fell, now head of Interactive Programming and Innovation.

Those who complain that TV is tired or constantly repeating itself need to take a long careful look at BBCi's recent output, because the future starts here.