Diversity And 'Doctor Who' 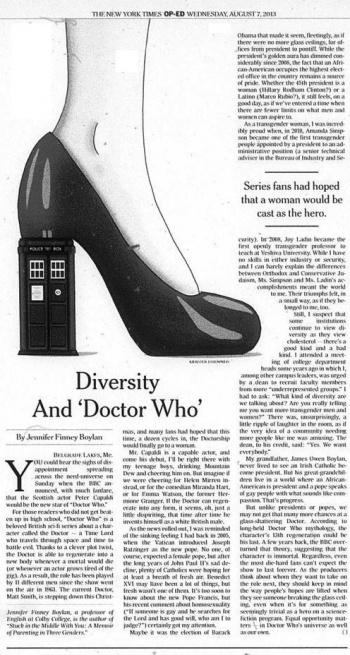 BELGRADE LAKES, Me. — YOU could hear the sighs of disappointment spreading across the nerd-universe on Sunday when the BBC announced, with much fanfare, that the Scottish actor Peter Capaldi would be the new star of "Doctor Who."

For those readers who did not get beaten up in high school, "Doctor Who" is a beloved British sci-fi series about a character called the Doctor — a Time Lord who travels through space and time to battle evil. Thanks to a clever plot twist, the Doctor is able to regenerate into a new body whenever a mortal would die (or whenever an actor grows tired of the gig). As a result, the role has been played by 11 different men since the show went on the air in 1963. The current Doctor, Matt Smith, is stepping down this Christmas, and many fans had hoped that this time, a dozen cycles in, the Doctorship would finally go to a woman.

Mr. Capaldi is a capable actor, and come his debut, I'll be right there with my teenage boys, drinking Mountain Dew and cheering him on. But imagine if we were cheering for Helen Mirren instead, or for the comedian Miranda Hart, or for Emma Watson, the former Hermione Granger. If the Doctor can regenerate into any form, it seems, oh, just a little dispiriting, that time after time he invents himself as a white British male.

As the news rolled out, I was reminded of the sinking feeling I had back in 2005, when the Vatican introduced Joseph Ratzinger as the new pope. No one, of course, expected a female pope, but after the long years of John Paul II's sad decline, plenty of Catholics were hoping for at least a breath of fresh air. Benedict XVI may have been a lot of things, but fresh wasn't one of them. It's too soon to know about the new Pope Francis, but his recent comment about homosexuality ("If someone is gay and he searches for the Lord and has good will, who am I to judge?") certainly got my attention.

Maybe it was the election of Barack Obama that made it seem, fleetingly, as if there were no more glass ceilings, for offices from president to pontiff. While the president's golden aura has dimmed considerably since 2008, the fact that an African-American occupies the highest elected office in the country remains a source of pride. Whether the 45th president is a woman (Hillary Rodham Clinton?) or a Latino (Marco Rubio?), it still feels, on a good day, as if we've entered a time when there are fewer limits on what men and women can aspire to.

As a transgender woman, I was incredibly proud when, in 2010, Amanda Simpson became one of the first transgender people appointed by a president to an administrative position (a senior technical adviser in the Bureau of Industry and Security). In 2008, Joy Ladin became the first openly transgender professor to teach at Yeshiva University. While I have no skills in either industry or security, and I can barely explain the differences between Orthodox and Conservative Judaism, Ms. Simpson and Ms. Ladin's accomplishments meant the world to me. Their triumphs felt, in a small way, as if they belonged to me, too.

Still, I suspect that some institutions continue to view diversity as they view cholesterol — there's a good kind and a bad kind. I attended a meeting of college department heads some years ago in which I, among other campus leaders, was urged by a dean to recruit faculty members from more "underrepresented groups." I had to ask: "What kind of diversity are we talking about? Are you really telling me you want more transgender men and women?" There was, unsurprisingly, a little ripple of laughter in the room, as if the very idea of a community needing more people like me was amusing. The dean, to his credit, said: "Yes. We want everybody."

My grandfather, James Owen Boylan, never lived to see an Irish Catholic become president. But his great-grandchildren live in a world where an African-American is president and a pope speaks of gay people with what sounds like compassion. That's progress.

But unlike presidents or popes, we may not get that many more chances at a glass-shattering Doctor. According to long-held Doctor Who mythology, the character's 13th regeneration could be his last. A few years back, the BBC overturned that theory, suggesting that the character is immortal. Regardless, even the most die-hard fans can't expect the show to last forever. As the producers think about whom they want to take on the role next, they should keep in mind the way people's hopes are lifted when they see someone breaking the glass ceiling, even when it's for something as seemingly trivial as a hero on a science-fiction program. Equal opportunity matters — in Doctor Who's universe as well as our own.

Jennifer Finney Boylan, a professor of English at Colby College, is the author of "Stuck in the Middle With You: A Memoir of Parenting in Three Genders."