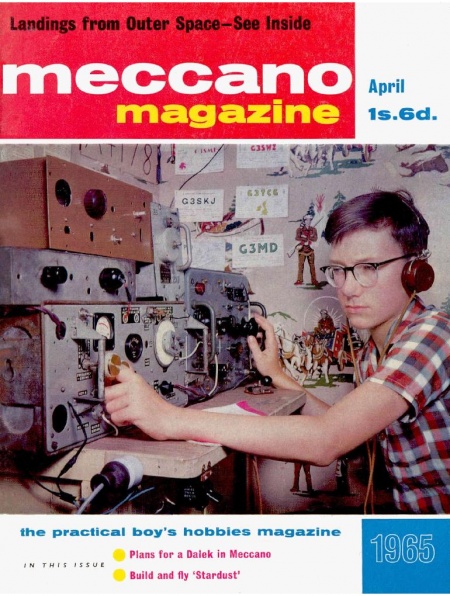 WHILE travelling into the future in his incredible 'time machine', Dr. Who and his three companions encountered the fearsome Daleks These weird space invaders of the future are, as most of you know, to be seen on the exciting television serial 'Dr. Who'.

However, although the Daleks are in many ways frightening, they are fascinating creatures with strange metallic voices that have the ability to slip along, robot-like, under their own power. In fact, so popular are the Daleks that toy shops throughout the country have been selling thousands of models of these space creatures. Therefore, I thought it would make a popular exercise to build a Dalek in Meccano. The model described in this article is based on a television Dalek, although it is not identical in shape. Motive power is supplied by an Emebo motor and two lamps on the front of the body flash on and off as the model moves.

An Intriguing model based on B.B.C. Television's famous "Daleks".

Two f in. x 1 in. Double Brackets 10, each carrying a Lamp Holder 11 (Elektrikit Part No. 539) and connected by a 2f in. Insulating Strip 12 (Elektrikit Part No. 502), are bolted to Plate 9. Half-inch Bolts are used to fix Insulating Strip 12 and the Lamp Holders to the Double Brackets. A Swivel Bearing 13, with a 31 in. Rod mounted in the spider, is attached to

The model viewed from beneath.

Strip 12 by means of a 1 in. Bolt through the centre hole. A

A square is formed from four 31 in. Angle Girders 26, and this is fixed to the top of the body, as shown, Fishplates connecting Strips 16 and 17 to the respective Girders.

Two circles 27 and 28 are each built up from two 54 in. Strips to which four Angle Brackets are bolted. Another three circles 29 are then built up from four 21 in. Stepped Curved Strips, the upper circle being braced by two 21 in. Strips 30. These Strips are connected by a further two 21 in. Strips 31 placed one on top of the other. All five circles are connected by eight 2 in. Screwed Rods, but are held apart by nuts on each Rod.

Fixed to the Boiler End 32 by a 1 in. Bolt is a Small Fork Piece that carries a Collar 33 between its arms. A 21 in. Rod, on which three f in. Washers, each spaced from the next by two Washers, are held by Collars, is mounted in this Collar. The Boiler End is placed on a 3 in. Pulley 34 and the two are fixed in place by another 2 in. Screwed Rod 35 held in Strips 31. Angle Brackets are used to secure the completed head to Girders 26.

A view of the gearbox showing the drive and also the commutator arrangement.

A 1 in. Corner Bracket 49 is bolted to each Angle Girder 36. Mounted in these is a third 31 in. Rod carrying a i in. Sprocket Wheel 50, and held in place by I in. Pulleys with Rubber Ring. Sprocket Wheels 39 and 50 are connected by Sprocket Chain. At the front, Girders 36 are bridged by a 21 in. Strip 51, to which a 1 in. x f in. Double Bracket is lock-nutted. Mounted in this Double Bracket is a If in. Rod, held in place by Collars, that carries a 1 in. loose Pulley 52, spaced from the lugs of the Bracket by Washers.

Finally, the completed arrangement is bolted to Angle Girders

diagram on this page, showing the wiring layout. Spanner