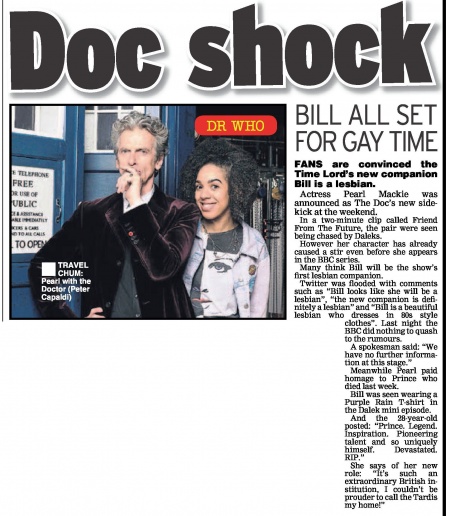 BILL ALL SET FOR GAY TIME

FANS are convinced the Time Lord's new companion Bill is a lesbian.

Actress Pearl Mackie was announced as The Doc's new sidekick at the weekend.

In a two-minute clip called Friend From The Future, the pair were seen being chased by Daleks.

However her character has already caused a stir even before she appears in the BBC series.

Many think Bill will be the show's first lesbian companion.

Twitter was flooded with comments such as "Bill looks like she will be a lesbian", "the new companion is definitely a lesbian" and "Bill is a beautiful lesbian who dresses in 80s style clothes". Last night the BBC did nothing to quash to the rumours.

A spokesman said: "We have no further information at this stage."

Bill was seen wearing a Purple Rain T-shirt in the Dalek mini episode.

And the 28-year-old posted: "Prince. Legend. Inspiration. Pioneering talent and so uniquely himself. Devastated. RIP."

She says of her new role: "It's such an extraordinary British institution, I couldn't be prouder to call the Tardis my home!"