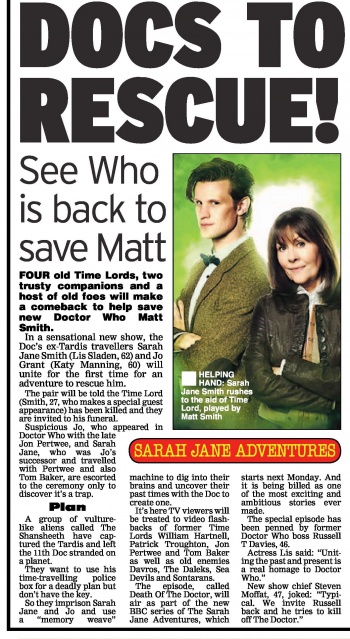 FOUR old Time Lords, two trusty companions and a host of old foes will make a comeback to help save new Doctor Who Matt Smith.

In a sensational new show, the Doc's ex-Tardis travellers Sarah Jane Smith (Lis Sladen, 62) and Jo Grant (Katy Manning, 60) will unite for the first time for an adventure to rescue him.

The pair will be told the Time Lord (Smith, 27, who makes a special guest appearance) has been killed and they are invited to his funeral.

Suspicious Jo, who appeared in Doctor Who with the late Jon Pertwee, and Sarah Jane, who was Jo's successor and travelled with Pertwee and also Tom Baker, are escorted to the ceremony only to discover it's a trap.

A group of vulturelike aliens called The Shansheeth have captured the Tardis and left the 11th Doc stranded on a planet.

They want to use his time-travelling police box for a deadly plan but don't have the key.

So they imprison Sarah Jane and Jo and use a "memory weave" machine to dig into their brains and uncover their past times with the Doc to create one.

The episode, called Death Of The Doctor, will air as part of the new BBC series of The Sarah Jane Adventures, which starts next Monday. And it is being billed as one of the most exciting and ambitious stories ever made.

The special episode has been penned by former Doctor Who boss Russell T Davies, 46.

Actress Lis said: "Uniting the past and present is a real homage to Doctor Who."

New show chief Steven Moffat, 47, joked: "Typical. We invite Russell back and he tries to kill off The Doctor."