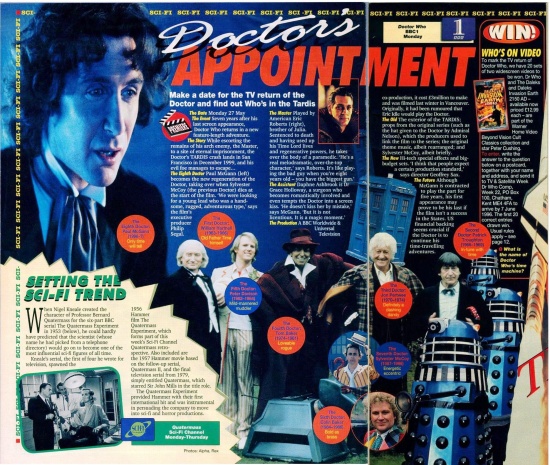 The Date Monday 27 May

The Event Seven years after his last screen appearance, Doctor Who returns in a new feature-length adventure.

The Story While escorting the remains of his arch enemy, the Master, to a site of eternal imprisonment, the Doctor's TARDIS crash lands in San Francisco in December 1999, and his evil foe manages to escape...

The Eighth Doctor Paul McGann (left) becomes the new regeneration of the Doctor, taking over when Sylvester McCoy (the previous Doctor) dies at the start of the film. 'We were looking for a young lead who was a handsome, rugged, adventurous type,' says the film's executive producer Philip Segal.

The Master Played by American Eric Roberts (right), brother of Julia. Sentenced to death and having used up his Time Lord lives and regenerative powers, he takes over the body of a paramedic. 'He's a real melodramatic, over-the-top character,' says Roberts. It's like playing the bad guy when you're eight years old - you have the biggest gun.'

The Assistant Daphne Ashbrook is Dr Grace Holloway, a surgeon who becomes romantically involved and even tempts the Doctor into a screen kiss. 'He doesn't kiss her by mistake,' says McGann. 'But it is not licentious. It is a magic moment.'

The Production A BBC Worldwide & Universal

Television co-production, it cost £3million to make and was filmed last winter in Vancouver. Originally, it had been rumoured that Eric Idle would play the Doctor.

The Old The exterior of the TARDIS; props from the original series (such as the hat given to the Doctor by Admiral Nelson), which the producers used to link the film to the series; the original theme music, albeit rearranged; and Sylvester McCoy, albeit briefly.

The Future Although McGann is contracted to play the part for five years, his first appearance may prove to be his last if the film isn't a success in the States. US financial backing seems crucial if the Doctor is to continue his time-travelling adventures.

When Nigel Kneale created the character of Professor Bernard Quatermass for the six-part BBC serial The Quatermass Experiment in 1953 (below), he could hardly have predicted that the scientist (whose name he had picked from a telephone directory) would go on to become one of the most influential sci-fi figures of all time.

Kneale's serial, the first of four he wrote for television, spawned the 1956 Hammer film The Quatermass Experiment, which forms part of this week's Sci-Fi Channel Quatermass retrospective. Also included are the 1957 Hammer movie based on the follow-up serial, Quatermass 11, and the final television serial from 1979, simply entitled Quatermass, which starred Sir John Mills in the title role.

The Quatermass Experiment provided Hammer with their first international hit and was instrumental in persuading the company to move 4 into sci-fi and horror productions.

To mark the TV return of Doctor Who, we have 20 sets of two widescreen videos to be won. Dr Who and The Daleks oat and Daleks Invasion Earth 2150 AD - available now priced £12.99 each - are part of the Warner Home Video

To enter, write the answer to the question below on a postcard, together with your name and address, and send it to TV & Satellite Week Dr Who Comp, Week 22, PO Box 100, Chatham, Kent ME4 4FA to , arrive by 7 June 1996. The first 20 correct entries drawn win. Usual rules apply - see page 12.

What is the name of Doctor Who's time machine?