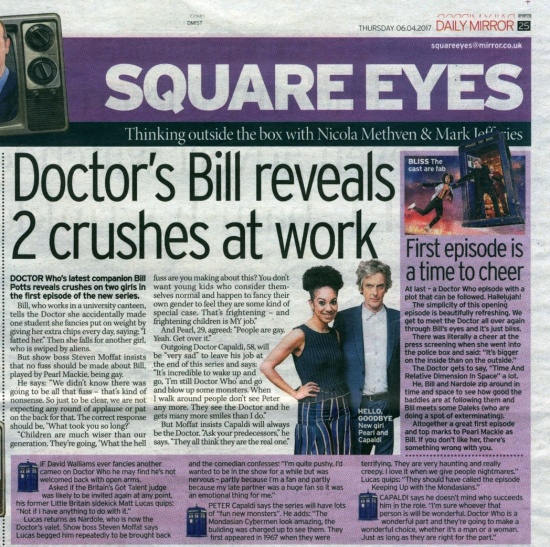 DOCTOR Who's latest companion Bill Potts reveals crushes on two girls in the first episode of the new series.

Bill, who works in a university canteen, tells the Doctor she accidentally made one student she fancies put on weight by giving her extra chips every day, saying: "I fatted her.' Then she falls for another girl, who is swiped by aliens.

But show boss Steven Moffat insists that no fuss should be made about Bill, played by Pearl Mackie, being gay.

He says: "We didn't know there was going to be all that fuss - that's kind of nonsense. So just to be clear, we are not expecting any round of applause or pat on the back for that. The correct response should be, 'What took you so long?'

"Children are much wiser than our generation. They're going, 'What the hell fuss are you making about this? You don't want young kids who consider themselves normal and happen to. fancy their own gender to feel they are some kind of special case. That's frightening - and frightening children is MY job."

Outgoing Doctor Capaldi, 58, will be "very sad" to leave his job at .the end of this series and says: "It's incredible to wake up and go, 'I'm still Doctor Who and go and blow up some monsters. When I walk around people don't see Peter any more. They see the Doctor and he gets many more smiles than I do."

But Moffat insists Capaldi will always be the Doctor. "Ask your predecessors: he says. "They all think they are the real one:'

First episode is a time to cheer

At last - a Doctor Who episode with a plot that can be followed. Hallelujah!

The simplicity of this opening episode is beautifully refreshing. We get to meet the Doctor all over again through Bill's eyes and it's just bliss.

There was literally a cheer at the press screening when she went into the police box and said: "It's bigger on the inside than on the outside."

The Doctor gets to say, "Time And Relative Dimension In Space" a lot.

He, Bill and Nardole zip around in time and space to see how good the baddies are at following them and Bill meets some Daleks (who are doing a spot of exterminating).

Altogether a great first episode and top marks to Pearl Mackie as Bill. If you don't like her, there's something wrong with you.

Caption: BLISS The cast are fab

IF David Walliams ever fancies another cameo on Doctor Who he may find he's not welcomed back with open arms.

Asked if the Britain's Got Talent judge was likely to be invited again at any point, his former Little Britain sidekick Matt Lucas quips: "Not if I have anything to do with it."

Lucas returns as Nardole, who is now the Doctor's valet. Show boss Steven Moffat says Lucas begged him repeatedly to be brought back and the comedian confesses: "I'm quite pushy. I'd wanted to be in the show for a while but was nervous - partly because I'm a fan and partly because my late partner was a huge fan so it was an emotional thing for me."

PETER Capaldi says the series will have lots of "fun new monsters". He adds: "The Mondasian Cybermen look amazing, the building was charged up to see them. They first appeared in 1967 when they were

terrifying. They are very haunting and really creepy. I love it when we give people nightmares." Lucas quips: "They should have called the episode Keeping Up with the Mondasians."

CAPALDI says he doesn't mind who succeeds him in the role. "I'm sure whoever that person is will be wonderful. Doctor Who is a wonderful part and they're going to make a wonderful choice, whether it's a man or a woman. Just as long as they are right for the part."