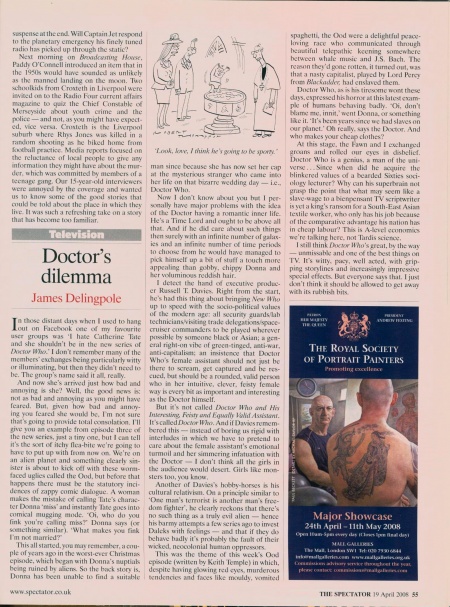 In those distant days when I used to hang out on Facebook one of my favourite user groups was 'I hate Catherine Tate and she shouldn't be in the new series of Doctor Who.' I don't remember many of the members' exchanges being particularly witty or illuminating, but then they didn't need to be. The group's name said it all, really.

And now she's arrived just how bad and annoying is she? Well, the good news is: not as bad and annoying as you might have feared. But, given how bad and annoying you feared she would be, I'm not sure that's going to provide total consolation. I'll give you an example from episode three of the new series, just a tiny one, but I can tell it's the sort of itchy flea-bite we're going to have to put up with from now on. We're on an alien planet and something clearly sinister is about to kick off with these wormfaced uglies called the Ood, but before that happens there must be the statutory incidences of zappy comic dialogue. A woman makes the mistake of calling Tate's character Donna 'miss' and instantly Tate goes into comical mugging mode. 'Oi, who do you fink you're calling miss?' Donna says (or something similar). 'What makes you fink I'm not married?' This all started, you may remember, a couple of years ago in the worst-ever Christmas episode, which began with Donna's nuptials being ruined by aliens. So the back story is, Donna has been unable to find a suitable man since because she has now set her cap at the mysterious stranger who came into her life on that bizarre wedding day -- i.e. , Doctor Who.

Now I don't know about you but I personally have major problems with the idea of the Doctor having a romantic inner life.

He's a Time Lord and ought to be above all that. And if he did care about such things then surely with an infinite number of galaxies and an infinite number of time periods to choose from he would have managed to pick himself up a bit of stuff a touch more appealing than gobby, chippy Donna and her voluminous reddish hair.

I detect the hand of executive producer Russell T. Davies. Right from the start, he's had this thing about bringing New Who up to speed with the socio-political values of the modern age: all security guards/lab technicians/visiting trade delegations/spacecruiser commanders to be played wherever possible by someone black or Asian; a general right-on vibe of green-tinged, anti-war, anti-capitalism; an insistence that Doctor Who's female assistant should not just be there to scream, get captured and be rescued, but should be a rounded, valid person who in her intuitive, clever, feisty female way is every bit as important and interesting as the Doctor himself.

But it's not called Doctor Who and His Interesting, Feisty and Equally Valid Assistant.

It's called Doctor Who. And if Davies remembered this -- instead of boring us rigid with interludes in which we have to pretend to care about the female assistant's emotional turmoil and her simmering infatuation with the Doctor -- I don't think all the girls in the audience would desert. Girls like monsters too, you know.

Another of Davies's hobby-horses is his cultural relativism. On a principle similar to 'One man's terrorist is another man's freedom fighter', he clearly reckons that there's no such thing as a truly evil alien -- hence his barmy attempts a few series ago to invest Daleks with feelings -- and that if they do behave badly it's probably the fault of their wicked, neocolonial human oppressors.

This was the theme of this week's Ood episode (written by Keith Temple) in which, despite having glowing red eyes, murderous tendencies and faces like mouldy, vomited spaghetti, the Ood were a delightful peaceloving race who communicated through beautiful telepathic keening somewhere between whale music and J.S. Bach. The reason they'd gone rotten, it turned out, was that a nasty capitalist, played by Lord Percy from Blackadder, had enslaved them.

Doctor Who, as is his tiresome wont these days, expressed his horror at this latest example of humans behaving badly. 'Oi, don't blame me, innit, ' went Donna, or something like it. 'It's been years since we had slaves on our planet.' Oh really, says the Doctor. And who makes your cheap clothes?

At this stage, the Fawn and I exchanged groans and rolled our eyes in disbelief.

Doctor Who is a genius, a man of the universe . . . Since when did he acquire the blinkered values of a bearded Sixties sociology lecturer? Why can his superbrain not grasp the point that what may seem like a slave-wage to a bienpensant TV scriptwriter is yet a king's ransom for a South-East Asian textile worker, who only has his job because of the comparative advantage his nation has in cheap labour? This is A-level economics we're talking here, not Tardis science.

I still think Doctor Who's great, by the way -- unmissable and one of the best things on TV. It's witty, pacy, well acted, with gripping storylines and increasingly impressive special effects. But everyone says that. I just don't think it should be allowed to get away with its rubbish bits.