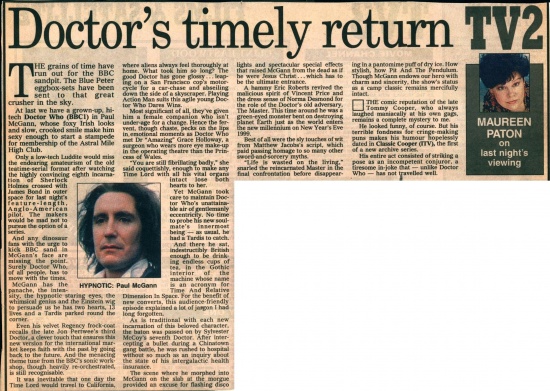 THE grains of time have run out for the BBC sandpit. The Blue Peter eggbox-sets have been sent to that great crusher in the sky.

At last we have a grown-up, hi-tech Doctor Who (BBC1) in Paul McGann, whose foxy Irish looks and slow, crooked smile make him sexy enough to start a stampede for membership of the Astral Mile High Club.

Only a low-tech Luddite would miss the endearing amateurism of the old teatime-serial format after watching the highly convincing eighth incarnation of Sherlock Holmes crossed with James Bond in outer space for last night's feature-length, Anglo-American pilot. The makers would be mad not to pursue the option of a series.

And any dinosaur fans with the urge to kick BBC sand in McGann's face are missing the point. Surely Doctor Who, of all people, has to move with the times. McGann has the panache, the intensity, the hypnotic staring eyes, the whimsical genius and the Einstein wig to persuade us he has two hearts, 13 lives and a Tardis parked round the corner.

Even his velvet Regency frock-coat recalls the late Jon Pertwee's third Doctor, a clever touch that ensures this new version for the international market keeps faith with the past by going back to the future. And the menacing theme tune from the BBC's sonic workshop, though heavily re-orchestrated, is still recognisable.

It was inevitable that one day the Time Lord would travel to California, where aliens always feel thoroughly at home. What took him so long? The good Doctor has gone glossy ... leaping on a San Francisco cop's motorcycle for a car-chase and abseiling down the side of a skyscraper. Playing Action Man suits this agile young Doctor Who Dares Wins.

Most significant of all, they've given him a female companion who isn't under-age for a change. Hence the fervent, though chaste, pecks on the lips in emotional moments as Doctor Who met Dr "Amazing" Grace Holloway, a surgeon who wears more eye make-up in the operating theatre than the Princess of Wales.

"You are still fibrillating badly," she said coquettishly, enough to make any Time Lord with all his vital organs intact lose both hearts to her.

Yet McGann took care to maintain Doctor Who's unattainable air of gentlemanly eccentricity. No time to probe his new soul-mate's innermost being — as usual, he had a Tardis to catch. And there he sat, indestructibly British enough to be drinking endless cups of tea, in the Gothic interior of the machine whose name is an acronym for Time And Relative Dimension In Space. For the benefit of new converts, this audience-friendly episode explained a lot of jargon I had long forgotten.

As is traditional with each new incarnation of this beloved character, the baton was passed on by Sylvester McCoy's seventh Doctor. After intercepting a bullet during a Chinatown gang battle, he was rushed to hospital without so much as an inquiry about the state of his intergalactic health insurance.

The scene where he morphed into McGann on the slab at the morgue provided an excuse for flashing disco lights and spectacular special effects that raised McGann from the dead as if he were Jesus Christ ... which has to be the ultimate entrance.

A hammy Eric Roberts revived the malicious spirit of Vincent Price and the dress sense of Norma Desmond for the role of the Doctor's old adversary. The Master. This time around he was a green-eyed monster bent on destroying planet Earth just as the world enters the new millennium on New Year's Eve 1999.

Best of all were the sly touches of wit from Matthew Jacobs's script, which paid passing homage to so many other sword-and-sorcery myths.

"Life is wasted on the living," snarled the reincarnated Master in the final confrontation before disappearing in a pantomime puff of dry ice. How stylish, how Pit And The Pendulum. Though McGann endows our hero with charm and sincerity, the show's status as a camp classic remains mercifully intact.