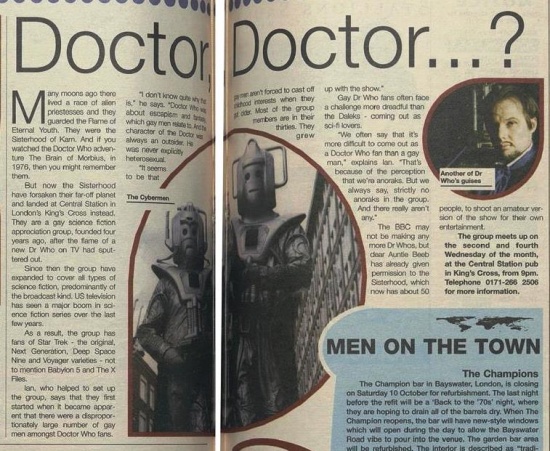 Many moons ago there lived a race of alien priestesses and they guarded the Flame of Eternal Youth. They were the Sisterhood of Karn. And if you watched the Doctor Who adventure The Brain of Morbius, in 1976, then you might remember them.

But now the Sisterhood have forsaken their far-off planet and landed at Central Station in London's King's Cross instead. They are a gay science fiction appreciation group, founded four years ago, after the flame of a new Dr Who on IV had sputtered out.

Since then the group have expanded to cover all types of science fiction, predominantly of the broadcast kind, US television has seen a major boom in science-fiction series over the last few years.

As a result, the group has fans of Star Trek - the original, Next Generation, Deep Space Nine and Voyager varieties - not to mention Babylon 5 and The X Files.

Ian, who helped to set up the group, says that they first started when it became apparent that there were a disproportionately large number of gay men amongst Doctor Who fans.

"I don't know why that is," he says. "Doctor Who was about escapism and fantasy, which gay men relate to. And the character of the Doctor was always an outsider. He was never explicitly heterosexual.

"It seems to be that gay men aren't forced to cast off childhood interests when they get older. Most of the group members are in their thirties. The grew up with the show."

Gay Dr Who fans often face a challenge more dreadful than the Daleks - coming out as sci-fi lovers.

"We often say that it's more difficult to come out as a Doctor Who fan than a gay man," explains Ian. "That's because of the perception that we're anoraks. But we always say, strictly no anoraks in the group. And there really aren't any."

The BBC may not be making any more Dr Whos, but dear Auntie Beeb has already given permission to the Sisterhood, which now has about 50 people, to shoot an amateur version of the show for their own entertainment.

The group meets up on the second and fourth Wednesday of the month, at the Central Station pub in King's Cross, from 9pm.