Doctor, we seem to have landed on our feet here 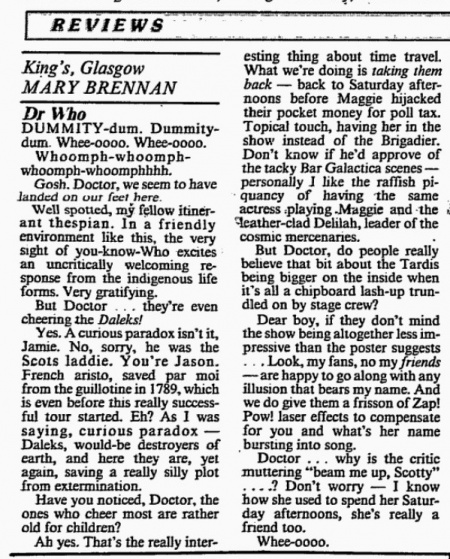 Gosh. Doctor, we seem to have landed on our feet here.

Well spotted, my fellow itinerant thespian. In a friendly environment like this, the very sight of you-know-Who excites an uncritically welcoming response from the indigenous life forms. Very gratifying.

But Doctor . . they're even cheering the Daleks!

Yes. A curious paradox isn't it, Jamie. No, sorry, he was the Scots laddie. You're Jason. French aristo, saved par moi from the guillotine in 1789, which is even before this really successful tour started. Eh? As I was saying, curious paradox —Daleks, would-be destroyers of earth, and here they are, yet again, saving a really silly plot from extermination.

Have you noticed, Doctor, the ones who cheer most are rather old for children?

Ah yes. That's the really interesting thing about time travel. What we're doing is taking them back — back to Saturday afternoons before Maggie hijacked their pocket money for poll tax. Topical touch, having her in the show instead of the Brigadier. Don't know if he'd approve of the tacky Bar Galactica scenes —personally I like the raffish piquancy of having the same actress playing Maggie and -the 'leather-clad Delilah, leader of the cosmic mercenaries.

But Doctor, do people really believe that bit about the Tardis being bigger on the inside when it's all a chipboard lash-up trundled on by stage crew?

Dear boy, if they don't mind the show being altogether less impressive than the poster suggests ... Look, my fans, no my friends —are happy to go along with any illusion that bears my name. And we do give them a frisson of Zap! Pow! laser effects to compensate for you and what's her name bursting into song.

Doctor ... why is the critic muttering "beam me up, Scotty" Don't worry — I know how she used to spend her Saturday afternoons, she's really a friend too.