Doctor Who's Who's Who and the very first Doctor 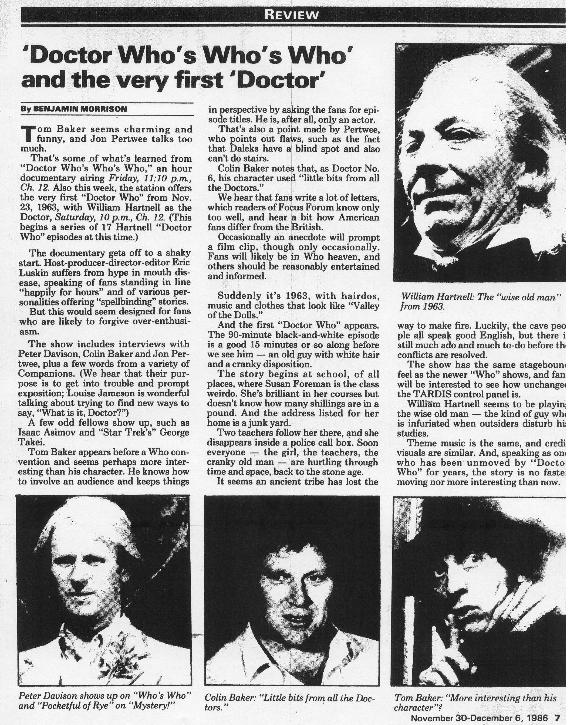 'Doctor Who's Who's Who' and the very first 'Doctor'

Tom Baker seems charming and funny, and Jon Pertwee talks too much.

The documentary gets off to a shaky start. Host-producer-director-editor Erik Luskin suffers from hype in mouth disease, speaking of fans standing in line "happily for hours" and of various personalities offering 'spellbinding" stories.

But this would seem designed for fans who are likely to forgive over-enthusiasm.

The show includes interviews with Peter Davison, Colin Baker and Jon Pertwee, plus a few words from a variety of Companions. (We hear that their purpose is to get into trouble and prompt exposition; Louise Jameson is wonderful talking about trying to find new ways to say, "What is it, Doctor?")

A few odd fellows show up. such as Isaac Asimov and "Star Trek's" George Takei.

Tom Baker appears before a Who convention and seems perhaps more interesting that his character. He knows how to involve an audience and keeps things in perspective by asking the fans for episode titles. He is, after all, only an actor.

That's also a point made by Pertwee, who points out flaws, such as the fact that Daleks have a blind spot and also can't do stairs.

Colin Baker notes that, as Doctor No. 6, his character used "little bits from all the Doctors."

We hear that fans write a lot of letters, which readers of Focus Forum know only too well, and hear a bit how American fans differ from the British.

Occasionally an anecdote will prompt a film clip though only occasionally. Fans will likely be in Who heaven, and others should be reasonably entertained and informed.

Suddenly it's 1968, with hairdos, music and clothes that look like "Valley of the Dolls."

And the first "Doctor Who" appears The 90-minute black-and-white episode is a good 15 minutes or so along before we see him — an old guy with white hair and a cranky disposition.

The story begins at school, of all places, where Susan Foreman is the class weirdo. She's brilliant in her courses but doesn't know how many shillings are in a pound. And the address listed for her home is a junk yard.

Two teachers follow her there, and she disappears inside a police call box. Soon everyone — the girl, the teachers, the cranky old man — are hurtling through time and space, back to the stone age.

It seems an ancient tribe has lost the way to make fire. Luckily the cave people all speak good English, but there is still much ado and much to-do before the conflicts are resolved.

The show has the same stagebound feel as the newer "Who" shows, and fans will be interested to see how unchanged the TARDIS control panel is.

Theme music is the same, and credit visuals are similar. And, speaking as one who has been unmoved by "Doctor Who' for years, the story is no faster moving nor more interesting than now.