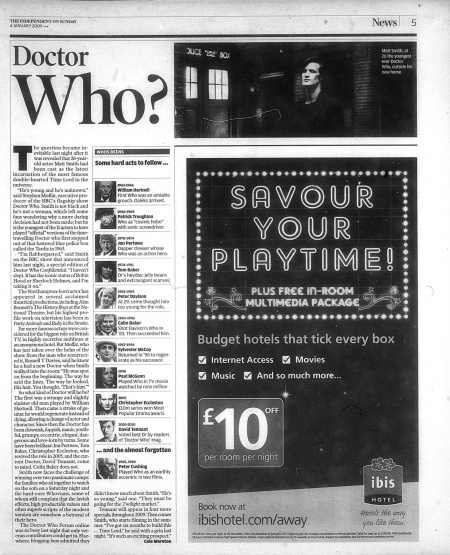 The question became inevitable last night after it was revealed that 26-year-old actor Matt Smith had been cast as the latest incarnation of the most famous double-hearted Time Lord in the universe.

"He's young and he's unknown," said Stephen Moffat, executive producer of the BBC's flagship show Doctor Who. Smith is not black and he's not a woman, which left some fans wondering why a more daring decision had not been made; but he is the youngest of the 11 actors to have played "official" versions of the time-travelling Doctor who first stepped out of that battered blue police box called the Tardis in 1963.

"I'm flabbergasted," said Smith on the BBC show that announced him last night, a special edition of Doctor Who Confidential. "I haven't slept. It has the iconic status of Robin Hood or Sherlock Holmes, and I'm taking it on."

The Northampton-born actor has appeared in several acclaimed theatrical productions, including Alan Bennett's The History Boys at the National Theatre, but his highest profile work on television has been in Party Animals and Ruby in the Smoke.

Far more famous actors were considered for the biggest role on British TV, in highly secretive auditions at an anonymous hotel. But Moffat, who has just taken over the helm of the show from the man who resurrected it, Russell T Davies, said he knew he a had a new Doctor when Smith walked into the room: "He was spot on from the beginning. The way he said the lines. The way he looked. His hair. You thought, 'That's him.'"

So what kind of Doctor will he be? The first was a strange and slightly sinister old man played by William Hartnell. Then came a stroke of genius: he would regenerate instead of dying, allowing a change of actor and character. Since then the Doctor has been clownish, foppish, manic, youthful, grumpy, eccentric, elegant, dangerous and love-lorn by turns. Some have been brilliant: Jon Pertwee, Tom Baker, Christopher Eccleston, who revived the role in 2005, and the current Doctor, David Tennant, come to mind. Colin Baker does not.

Smith now faces the challenge of winning over two passionate camps: the families who sit together to watch on the sofa on a Saturday night and the hard-core Whovians, some of whom still complain that the lavish effects, high production values and often superb scripts of the modern version are somehow a betrayal of their hero.

The Doctor Who Forum online was so busy last night that only veteran contributors could get in. Elsewhere, blogging fans admitted they didn't know much about Smith. "He's so young," said one. "They must be going for the Twilight market."

Tennant will appear in four more specials, throughout 2009. Then comes Smith, who starts filming in the summer. "I've got six months to build this ... Time Lord," he said with a grin last night. "It's such an exciting prospect."

First Who was an amiable grouch. Daleks arrived.

Who as "cosmic hobo" with sonic screwdriver.

Dapper dresser whose Who was an action hero.

At 29, some thought him too young for the role.

Shot Davison's Who in '83. Then succeeded him.

Returned in '96 to regenerate as his successor.

Played Who in TV movie watched by nine million

Voted best Dr by readers of 'Doctor Who' mag.

... and the almost forgotten

Played Who as an earthly eccentric in two films.