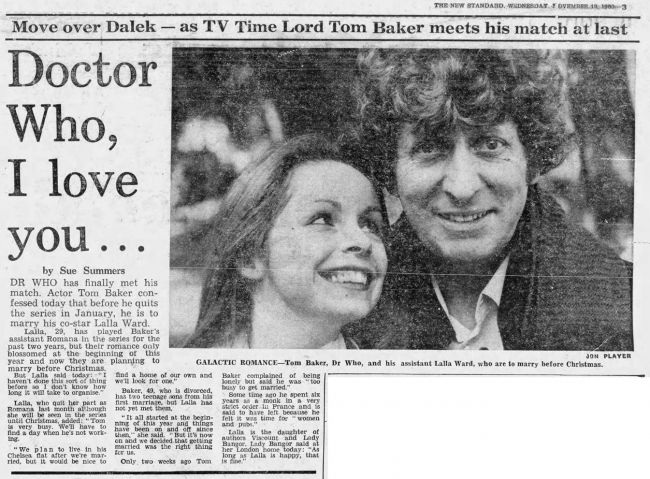 DR WHO has finally met his match. Actor Tom Baker confessed today that before he quits the series in January, he is to marry his co-star Lalla Ward.

Lalla, 29, has played Baker's assistant Romana in the series for the past two years, but their romance only blossomed at the beginning of this year and now they are planning to marry before Christmas.

But Lalla said today: " I haven't done this sort of thing before so I don't know how long it will take to organise."

Lalla, who quit her part as Romana last month although she will be seen in the series until Christmas, added: "Tom is very busy. We'll have to find a day when he's not working.

"We plan to live in his Chelsea flat after we're married, but it would be nice to find a home of our own and we'll look for one."

Baker, 49, who is divorced, has two teenage sons from his first marriage, but Lalla has not yet met them.

"It all started at the beginning of this year and things have been on and off since them," she said. " But it's now on and we decided that getting married was the right thing for us.

Only, two weeks ago Tom Baker complained of being lonely but said he was "too busy to get married."

Some time ago he spent six years as a monk in a very strict order in France and is said to have left because he felt it was time for "women and pubs."

Lalla is the daughter of authors Viscount and Lady Bangor. Lady Bangor said at her London home today: "As long as Lalla is happy, that is fine."

Caption: GALACTIC ROMANCE—Tom Baker, Dr Who, and his assistant Lalla Ward, who are to marry before Christmas.