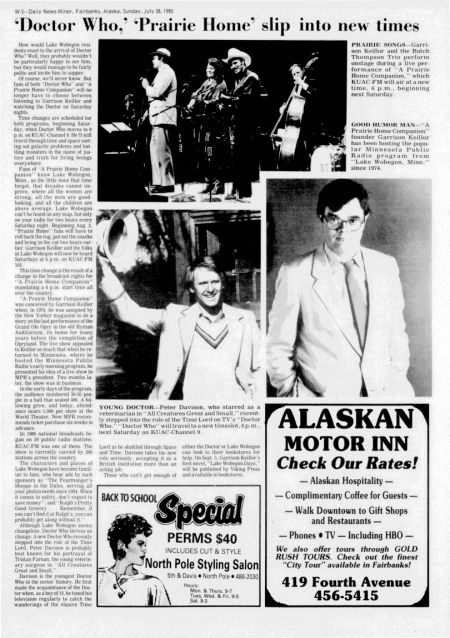 How would Lake Wobegon residents react to the arrival of Doctor Who? Well, they probably wouldn't be particularly happy to see him, but they would manage to be fairly polite and invite him to supper.

Of course, we'll never know. But fans of both "Doctor Who" and "A Prairie Home Companion" will no longer have to choose between listening to Garrison Keillor and watching the Doctor on Saturday nights.

Time changes are scheduled for both programs, beginning Saturday, when Doctor Who moves to 8 p.m. on KUAC-Channel 9. He'll still travel through time and space sorting out galactic problems and battling monsters in the name of justice and truth for living beings everywhere.

Fans of "A Prairie Home Companion" know Lake Wobegon, Minn., as the little town that time forgot, that decades cannot improve, where all the women are strong, all the men are good-looking, and all the children are above average. Lake Wobegon can't be found on any map, but only on your radio for two hours every Saturday night. Beginning Aug. 3, "Prairie Home" fans will have to roll back the rug, put out the snacks and bring in the cat two hours earlier. Garrison Keillor and the folks at Lake Wobegon will now be heard Saturdays at 6 p.m. on KUAC-FM 105.

This time change is the result of a change in the broadcast rights for "A Prairie Home Companion" mandating a 6 p.m. start time all over the country.

"A Prairie Home Companion" was conceived by Garrison Keillor when, in 1974, he was assigned by the New Yorker magazine to do a story on the last performance of the Grand Ole Opry in the old Ryman Auditorium, its home for many years before the completion of Opryland. The live show appealed to Keillor so much that when he returned to Minnesota, where he hosted the Minnesota Public Radio's early morning program, he presented his idea of a live show to MPR's president. Two months later, the show was in business.

In the early days of the program, the audience numbered 20-50 people in a hall that seated 400. A following grew, and today, attendance nears 1,000 per show at the World Theater. Now MPR recommends ticket purchase six weeks in advance.

KUAC-FM was one of them. The show is currently carried by 260 stations across the country.

The characters and places of Lake Wobegon have become familiar to fans, who hear ads by such sponsors as "The Fearmonger's Shoppe in the Dales, serving all your phobia needs since 1954. When it comes to safety, don't expect to save money"; and "Ralph's Pretty Good Grocery ... Remember, if you can't find it at Ralph's, you can probably get along without it."

Although Lake Wobegon seems changeless, Doctor Who thrives on change. A new Doctor Who recently stepped into the role of the Time Lord. Peter Davison is probably best known for his portrayal of Tristan Farnan, the young veterinary surgeon in All Creatures Great and Small."

Davison is the youngest Doctor Who in the series' history. He first made the acquaintance of the Doctor when, as a boy of 12, he tuned his television regularly to catch the wanderings of the elusive Time Lord as he shuttled through Space and Time. Davison takes his new role seriously, accepting it as a British institution more than an acting job.

Those who can't get enough of either the Doctor or Lake Wobegon can look to their bookstores for help. On Sept. 5, Garrison Keillor's first novel, "Lake Wobegon Days,' will be published by Viking Press and available in bookstores.

Caption: YOUNG DOCTOR—Peter Davison, who starred as a veterinarian in "All Creatures Great and Small," recently stepped into the role of the Time Lord on TV's "Doctor Who." "Doctor Who" will travel to a new timeslot, 8 p.m.. next Saturday on KUAC-Channel 9.