Doctor Who: A 50th anniversary primer 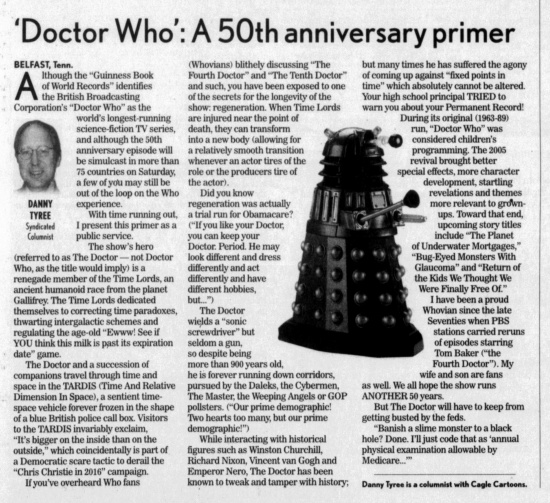 Although the "Guinness Book of World Records" identifies the British Broadcasting Corporation's "Doctor Who" as the world's longest-running science-fiction TV series, and although the 50th anniversary episode will be simulcast in more than 75 countries on Saturday, a few of rru may still be out of the loop on the Who experience.

With time running out, I present this primer as a public service.

The show's hero (referred to as The Doctor — not Doctor Who, as the title would imply) is a renegade member of the Time Lords, an ancient humanoid race from the planet Gallifrey. The Time Lords dedicated themselves to correcting time paradoxes, thwarting intergalactic schemes and regulating the age-old "Ewww! See if YOU think this milk is past its expiration date" game.

The Doctor and a succession of companions travel through time and space in the TARDIS (Time And Relative Dimension In Space), a sentient time-space vehicle forever frozen in the shape of a blue British police call box. Visitors to the TARDIS invariably exclaim, "It's bigger on the inside than on the outside," which coincidentally is part of a Democratic scare tactic to derail the "Chris Christie in 2016" campaign.

If you've overheard Who fans (Whovians) blithely discussing "The Fourth Doctor" and "The Tenth Doctor" and such, you have been exposed to one of the secrets for the longevity of the show: regeneration. When Time Lords are injured near the point of death, they can transform into a new body (allowing for a relatively smooth transition whenever an actor tires of the role or the producers tire of the actor).

The Doctor wields a "sonic screwdriver" but seldom a gun, so despite being more than 900 years old, he is forever running down corridors, pursued by the Daleks, the Cybermen, The Master, the Weeping Angels or GOP pollsters. ("Our prime demographic! Two hearts too many, but our prime demogaphic!")

While interacting with historical figures such as Winston Churchill, Richard Nixon, Vincent van Gogh and Emperor Nero, The Doctor has been known to tweak and tamper with history; but many times he has suffered the agony of coming up against "fixed points in time" which absolutely cannot be altered. Your high school principal TRIED to warn you about your Permanent Record!

During its original (1963-89) run, "Doctor Who" was considered children's programming. The 2005 revival brought better special effects, more character development, startling revelations and themes more relevant to grown-ups. Toward that end, upcoming story titles include "The Planet of Underwater Mortgages," "Bug-Eyed Monsters With Glaucoma" and "Return of the Kids We Thought We Were Finally Free Of." I have been a proud Whovian since the late Seventies when PBS stations carried reruns of episodes starring Tom Baker ("the Fourth Doctor"). My wife and son are fans as well. We all hope the show runs ANOTHER 50 years.

But The Doctor will have to keep from getting busted by the feds.

"Banish a slime monster to a black hole? Done. I'll just code that as 'annual physical examination allowable by Medicare..."

Danny Tyree is a columnist with Cagle Cartoons.